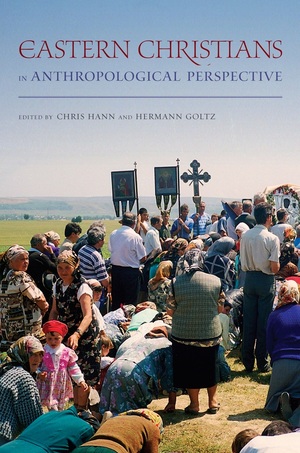 The title of the introduction to this volume mimics the habit, common in the recent past in some parts of the West, of referring to the socialist bloc as "the other Europe." Otherness is a matter of perspective, and symbolic geographies are always contingent. Political boundaries between East and West have seldom coincided with religious boundaries. During the cold war, socialist countries such as Poland and Hungary belonged to the West in terms of their dominant

Sociocultural anthropologists have taken increasing interest in the global communities established by Roman Catholic and Protestant churches, but the many streams of Eastern Christianity have so far been neglected. Eastern Christians in Anthropological Perspective fills this gap in the literature. The essays in this pioneering collection examine the primary distinguishing features of the Eastern traditions—iconography, hymnology, ritual, and pilgrimage—through meticulous ethnographic analysis. Particular attention is paid to the revitalization of Orthodox and Greek Catholic churches that were repressed under Marxist-Leninist regimes.

Chris Hann is a founding Director of the Max Planck Institute for Social Anthropology, Halle, Germany. Hermann Goltz holds the chair for theology and culture of the Eastern Orthodox Churches at the Theological Faculty of the Martin Luther University, Halle-Wittenberg, Germany.

“An original contribution to the anthropology of religion.”—Juraj Buzalkla Anthropological Quarterly

"This collection of essays is a welcome and refreshing gift in a virtual desert. There has been very little comparative anthropological research on the Eastern churches, and this volume will fill that gap."—Michael Herzfeld, author of Evicted from Eternity: The Restructuring of Modern Rome

"At long last there is a book on the anthropology of Christianity that devotes direct and sustained attention to the diverse Eastern Christian Churches—both Orthodox and Catholic. This book should be read by anyone who thinks anthropologically about Christianity. Scales will fall from their eyes and they will behold an entire wing of Christianity that has, until now, gone mostly unnoticed and practically untheorized."—Douglas Rogers, author of The Old Faith and the Russian Land: A Historical Ethnography of Ethics in the Urals

Introduction: The Other Christianity?
Chris Hann and Hermann Goltz

PART ONE. IMAGE AND VOICE: THE SENSUOUS EXPRESSION OF THE SUBLIME

2. A Dual Quarrel of Images on the Middle Volga: Icon Veneration in the Face of Protestant and Pagan Critique
Sonja Luehrmann

3. Icons and/or Statues? The Greek Catholic Divine Liturgy in Hungary and Romania, between Renewal and Purification
Stéphanie Mahieu

4. The Acoustics and Geopolitics of Orthodox Practices in the Estonian-Russian Border Region
Jeffers Engelhardt

PART TWO. KNOWLEDGE AND RITUAL: MONASTERIES AND THE RENEWAL OF TRADITION

5. The Spirit and the Letter: Monastic Education in a Romanian Orthodox Convent
Alice Forbess

7. Monasteries, Politics, and Social Memory: The Revival of the Greek Orthodox Church of Antioch in Syria during the Twentieth Century
Anna Poujeau

10. Pilgrimages as Kenotic Communities beyond the Walls of the Church
Inna Naletova

PART FOUR. PERSON AND NATION: CHURCH, CHRISTIAN COMMUNITY, AND SPECTRES OF THE SECULAR