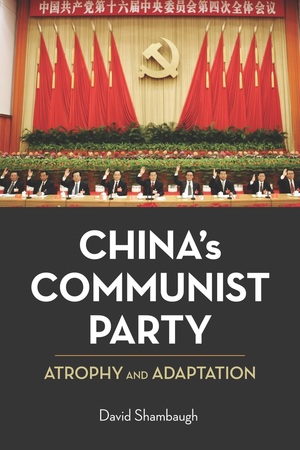 Few issues affect the future of China—and hence all the nations that interact with China—more than the nature of its ruling party and government. In this timely study, David Shambaugh assesses the strengths and weaknesses, durability, adaptability, and potential longevity of China's Communist Party (CCP). He argues that although the CCP has been in a protracted state of atrophy, it has undertaken a number of adaptive measures aimed at reinventing itself and strengthening its rule. Shambaugh's investigation draws on a unique set of inner-Party documents and interviews, and he finds that China's Communist Party is resilient and will continue to retain its grip on power.

David Shambaugh is Professor of Political Science and International Affairs and Director of the China Policy Program at the Elliott School of International Affairs, George Washington University. He is also a Non-Resident Senior Fellow in Foreign Policy Studies at the Brookings Institution. He has written and edited many books, including Modernizing China's Military: Progress, Problems, and Prospects (UC Press, 2004) and Power Shift: China and Asia’s New Dynamics (UC Press, 2005).

“Shambaugh's book is a very fitting one to turn to just now. . . . Shambaugh provides one of the best accounts yet of the post-1989 reinvention of the Chinese Communist Party.”—Huffington Post

“Sobering but illuminating. . . . Exciting to read.”—New York Review Of Books

“A valuable addition to the debate on the Chinese Communist Party (CCP) and the prospect of political change and societal stability in China. . . . A page turner, well researched and informative.”—Journal Of Asian Stds

“Shambaugh shows how the Chinese Communist Party . . . improved its ability to control the rate of change in China and stay in power. Its moves toward internal democracy, he argues, are intended to avoid the fate of the Soviet Communist Party.”—Foreign Affairs

"Why has the Chinese Communist Party kept its grip on power while the former communist states of the Soviet Union and Eastern Europe have collapsed? And where is China heading? In these pages, David Shambaugh provides a much-needed intellectual framework for thinking about China's recent past and future."—J. Stapleton Roy, former U.S. Ambassador to China, Indonesia, and Singapore

“To understand Chinese politics, one has to understand the complex and manifold role of the Chinese Communist Party. Shambaugh's book provides this much-needed knowledge and insight.” –Zbigniew Brzezinski, Center for Strategic and International Studies


“Unlike deductive or speculative Western discourse on the direction of China's political change, this authoritative book scrutinizes the Chinese Communist Party on the basis of its own discourse about other party-states as well as the way it applies these lessons in rebuilding efforts. The coverage of comparative communism is a tour de force, breaking exciting new ground in explaining the important debates over the Soviet Union. The analysis of the ideological and organizational rebuilding of the Party sets the standard for future writings on Chinese politics. With convenient summaries of a wide range of views by Western scholars, this book can serve as a text that combines an overview of the field with the author's clear point of view on China's future.”–Gilbert Rozman, Princeton University

"David Shambaugh's innovative investigation of how China understood the fall of European communism contributes an important new dimension to our understanding of the Chinese regime's own trajectory. Shambaugh shows how the lessons China's Communist Party took from the Soviet and other collapses helped to shape their reforms, which were aimed at avoiding the fatal errors of communist regimes elsewhere. This book reveals how well the Chinese learned their lessons, as demonstrated by the regime's carefully targeted adaptations and its consequent survival."—Andrew J. Nathan, co-author of China's New Rulers
Read More > 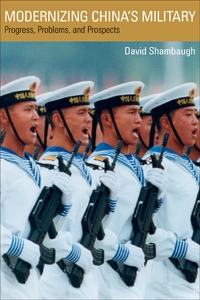