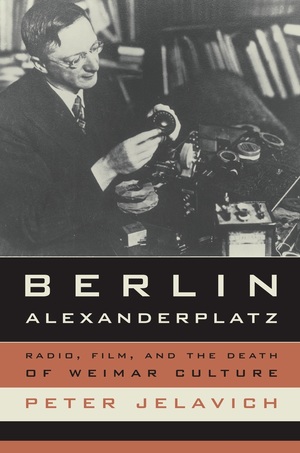 Berlin Alexanderplatz Radio, Film, and the Death of Weimar Culture

This fascinating exploration of a work that was the epitome of German literary modernism illuminates in chilling detail the death of the Weimar Republic's left-leaning culture of innovation and experimentation. Peter Jelavich examines Alfred Döblin's Berlin Alexanderplatz (1929), a novel that questioned the autonomy and coherence of the human personality in the modern metropolis, and traces the radical discrepancies that came with its adaptation into a radio play (1930) and a film (1931). Jelavich explains these discrepancies by examining not only the varying demands of genre and technology but also the political and economic contexts of the media—in particular, the censorship practices in German radio and film. His analysis culminates in a richly textured discussion of the complex factors that led to the demise of Weimar culture, as Nazi intimidation and the economic strains of the Depression induced producers to depoliticize their works. Jelavich's book becomes a cautionary tale about how fear of outspoken right-wing politicians can curtail and eliminate the arts as a critical counterforce to politics—all in the name of entertainment.

Peter Jelavich, Professor of History at Johns Hopkins University, is author of Berlin Cabaret (1993) and Munich and Theatrical Modernism: Politics, Playwriting, and Performance, 1890-1914 (1985).

“In Peter Jelavich’s important work, the study of cultural history moves beyond the sphere of textual interpretation to analyze the complex interplay of multiple media in the making of modern German culture.”—History: Reviews of New Books

“In reconstructing the rich history of one story, Jelavich gives us new insight into the convergence of aesthetics and politics in the Weimar Republic.”—Monatshefte

"Jelavich’s study provides rich documentation of the 'death of Weimar culture,' drawing on archival documents of the Weimar government, the trade press of the broadcasting and movie industries, the daily press, and specialized literary journals of the time. Much of this background has been marshaled before by German scholars, but rarely has it been set out in English and never in such a readable, compelling story around the fate of a single literary text."—Journal of Modern History

"Jelavich has written a fascinating study of mass media and censorship in the Weimar Republic, using Alfred Doblin's work as a case study."—German Studies Review

"This is cultural history at its best. Jelavich offers a compelling case study that illuminates the 'death of Weimar culture' in chilling detail. No other work informs us so masterfully about the mechanisms of media censorship and authorial self-censorship during the last years of the Weimar Republic."—Bernd Widdig, author of Culture and Inflation in Weimar Germany


"Jelavich's unique approach constitutes a brilliant achievement. He constructs a prism of the novel, radio play, and film of Berlin Alexanderplatz that reflects the political, social, and cultural conditions of the disintegrating Weimar Republic against the rise of Nazism."—Michael H. Kater, author of Hitler Youth

"Berlin Alexanderplatz represents historical and cultural scholarship at its best. Though meticulously researched and documented, Jelavich does not drown the reader in historical data. This is a stimulating and persuasive read."—Lutz Koepnick, author of Dark Mirror: German Cinema between Hollywood and Hitler