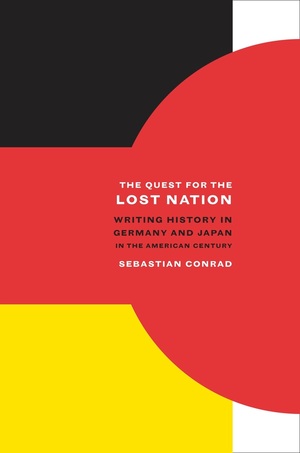 Highly praised when published in Germany, The Quest for the Lost Nation is a brilliant chronicle of Germany's and Japan's struggles to reclaim a defeated national past. Sebastian Conrad compares the ways German and Japanese scholars revised national history after World War II in the shadows of fascism, surrender, and American occupation. Defeat in 1945 marked the death of the national past in both countries, yet, as Conrad proves, historians did not abandon national perspectives during reconstruction. Quite the opposite—the nation remained hidden at the center of texts as scholars tried to make sense of the past and searched for fragments of the nation they had lost. By situating both countries in the Cold War, Conrad shows that the focus on the nation can be understood only within a transnational context.

Sebastian Conrad is Professor of History at the European University Institute in Florence. Conrad is also the author of Globalisation and Nation in Imperial Germany and has edited, together with Dominic Sachsenmaier, Competing Visions of World Order: Global Moments and Movements, 1880s-1930s.

“The Quest for the Lost Nation should be celebrated as the first book of its kind that subjects the major historical texts written in early postwar Germany and Japan to sophisticated comparative analysis.”—Franziska Seraphim Monumenta Nipponica

“An important examination of the context and content of historical scholarship in postwar Germany and Japan . . . a splendid example of comparative history.”—Central European History

"This is an extraordinarily compelling story. It is a bold and innovative retelling of the German and Japanese effort to reconstruct a national history. The Quest for the Lost Nation is a model for comparative history—and should serve as an incentive for a new generation to do more of this kind of work."—Michael Geyer, University of Chicago

"Comparative and transnational, The Quest for the Lost Nation brilliantly illuminates the predicaments of postwar historical thinking in the aftermath of what was for both nations, Germany and Japan, an unmitigated catastrophe. Even as intellectuals called for a wider, even global purview, it was the defeated nation that served as the locus of critical thinking about the immediate past. A timely and original work."—Helmut Walser Smith, author of The Continuities of German History

"Conrad demolishes the now frequently invoked contrast between an active German confrontation with the Nazi past and an ostensible Japanese hesitancy (or worse) to face history in the crucial decade and a half following 1945. The Quest for the Lost Nation is a probing and highly significant study."—Andrew Barshay, author of The Social Sciences in Modern Japan: The Marxian and Modernist Traditions

1. Mapping Postwar Historiography in Germany and Japan
2. The Origin of the Nation: Bismarck, Meiji Ishin, and the Subject of History
3. The Nation as Victim: Writing the History of National Socialism and Japanese Fascism
4. The Invention of Contemporary History
5. The Temporalization of Space: Germany and Japan between East and West
6. History and Memory: Germany and Japan, 1945–2