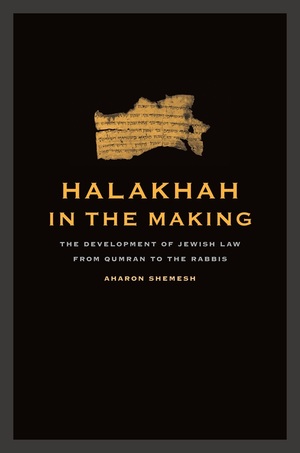 Halakhah in the Making offers the first comprehensive study of the legal material found in the Dead Sea Scrolls and its significance in the greater history of Jewish religious law (halakhah). Aharon Shemesh's pioneering study revives an issue long dormant in religious scholarship: namely, the relationship between rabbinic law, as written more than one hundred years after the destruction of the Second Temple, and Jewish practice during the Second Temple. The monumental discovery of the Dead Sea Scrolls in Qumran led to the revelation of this missing material and the closing of a two-hundred-year gap in knowledge, allowing work to begin comparing specific laws of the Qumran sect with rabbinic laws. With the publication of scroll 4QMMT-a polemical letter by Dead Sea sectarians concerning points of Jewish law-an effective comparison was finally possible. This is the first book-length treatment of the material to appear since the publication of 4QMMT and the first attempt to apply its discoveries to the work of nineteenth-century scholars. It is also the first work on this important topic written in plain language and accessible to nonspecialists in the history of Jewish law.

Aharon Shemesh teaches in the Department of Talmud, Bar-Ilan University. He has published widely on the development of Jewish law in antiquity. This book is based on the series of talks he delivered for the Taubman Lectures in Jewish Studies at the University of California, Berkeley.

“Shemesh’s book is a very welcome and valuable contribution from an accomplished scholar who is superbly competent in both bodies of legal literature. We are deeply indebted to him for the many doors that he opens to further exploration of the profound variegation in form and content of ancient Jewish legal discourse, setting all future scholarship in this burgeoning field on a firm textual and conceptual foundation.”—Journal For The Study Of Judaism

"Aharon Shemesh outlines in an accessible form the major features of the history of halakhah between the Dead Sea Scrolls and the early rabbinic traditions. While agreeing with other scholars on the conservative, stringent approach to halakhah of both the Sadducees and the authors of the Scrolls, Shemesh argues that this approach surprisingly had more impact on Pharisaic and rabbinic Judaism than usually assumed. This is a unique and original thesis."—Lutz Doering, Durham University