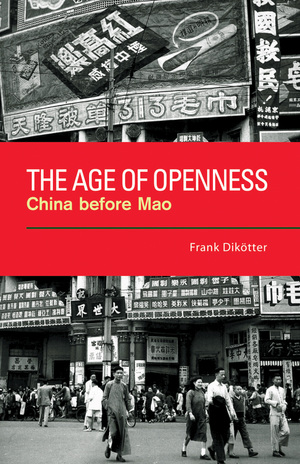 The Age of Openness China before Mao

The era between empire and communism is routinely portrayed as a catastrophic interlude in China's modern history. But in this book, Frank Dikötter shows that the first half of the twentieth century was characterized by unprecedented openness. He argues that from 1900 to 1949, all levels of Chinese society were seeking engagement with the rest of the world and that pursuit of openness was particularly evident in four areas: governance, including advances in liberties and the rule of law; greater freedom of movement within the country and outside it; the spirited exchange of ideas in the humanities and sciences; and thriving and open markets and the resulting sustained growth in the economy.

Frank Dikötter is Professor of Chinese Modern History at the School of Oriental and African Studies, University of London, and Chair of Humanities at the University of Hong Kong. He has published a series of innovative books, including The Discourse of Race in Modern China and Narcotic Culture: a History of Drugs and China.

"In this succinct and vigorous book, Frank Dikötter presents a cornucopia of graphic examples to show that China in the first half of the twentieth century, far from being in a state of decay that called for revolutionary action, was in fact a vibrant and cosmopolitan society. In such a reading, the current Chinese leaders should not be seen as striving to do something bold and new; they are merely struggling to rebuild a network of global connections that Mao and others had systematically helped to destroy. This should be an ideal book to spark class discussion on modern China."—Jonathan Spence, author of The Search for Modern China and Return to Dragon Mountain

"The always innovative Frank Dikötter infuses new life into an historical period left by most historians for dead—China's republican era from 1912 to 1949. In his persuasive recounting, this cosmopolitan, dynamic era has more to tell us about modern China's long-term trajectory than the authoritarian interlude that followed it."—Andrew J. Nathan, Class of 1919 Professor of Political Science, Columbia University