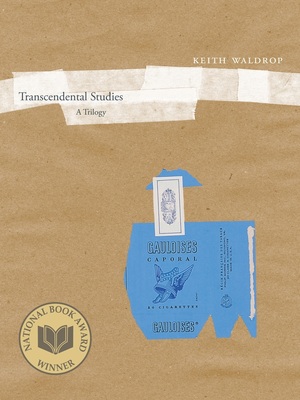 This compelling selection of recent work by internationally celebrated poet Keith Waldrop presents three related poem sequences—"Shipwreck in Haven," "Falling in Love through a Description," and "The Plummet of Vitruvius"—in a virtuosic poetic triptych. In these quasi-abstract, experimental lines, collaged words torn from their contexts take on new meanings. Waldrop, a longtime admirer of such artists as the French poet Raymond Queneau and the American painter Robert Motherwell, imposes a tonal override on purloined materials, yet the originals continue to show through. These powerful poems, at once metaphysical and personal, reconcile Waldrop's romantic tendencies with formal experimentation, uniting poetry and philosophy and revealing him as a transcendentalist for the new millennium.

Keith Waldrop, Brooke Russell Astor Professor of Humanities at Brown University, has published more than a dozen works each of original poetry and translations. His first book, A Windmill Near Calvary, was shortlisted for the 1968 National Book Award. Recent books include The Real Subject: Queries and Conjectures of Jacob Delafon, with Sample Poems, The House Seen from Nowhere, and a translation of The Flowers of Evil by Charles Baudelaire.

“Waldrop has long been a major force in American avant-garde poetics, and this substantial new volume is big news indeed. . . . Entrancing.”—Publishers Weekly

“These poems demand a certain reverence.”—Bookforum

"Keith Waldrop is one of the freshest, strongest poets in our language. Transcendental Studies shows how good he really is. Intelligence and lyricism live together in his work, exalted intellect and sly cunning, playfulness and heartbreak, they all dance together, sometimes with postmodern angularity, sometimes with a sort of Horatian civility. I open the book and read and just want to go on. Waldrop's mastery is not just of the local text, but of that great animal, the book."—Robert Kelly, author of The Book from the Sky

"Keith Waldrop has concerned himself with the topology of the world of writing more consistently and valuably than any poet I can think of since the late Paul Celan. There is, in Waldrop's work, a steady thought directed to the way that we make our way in the world by thinking and speaking. Where Wallace Stevens gave us the portrait of a man bothered by the march of ants through his shadow, Waldrop gives us the disturbances of the world in its representations."—A. L. Nielsen, Gargoyle


"Along with iridescent things these cycles of eccentrically drifting poems tell of our oceanic and domestic spaces for life and death, it is the phrasing itself that shows Keith Waldrop's artistry. Discrete but dreamlike, the phrasing is every poem's heartbeat. While its leaps and glides take metaphysics home at last, it is the writing, not that of a conjuror but the word as such (as elsewhere in Waldrop's outrageously funny poems), that fascinates. Here is a poet still against the grain and of authentic madcap modernity."—Christopher Middleton, author of Collected Poems
Read More >

I: Shipwreck in Haven

II: Falling in Love through a Description

III: The Plummet of Vitruvius

Variations on a Paraphrase