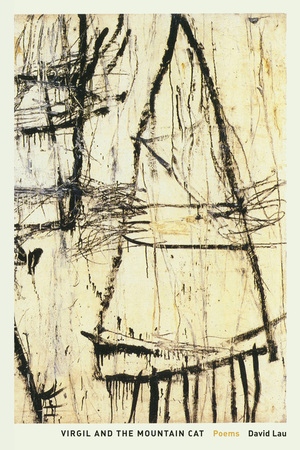 Virgil and the Mountain Cat Poems

At once uncompromising and highly inventive, David Lau's poems are imbued with a musicality that lightens the dark undertones of spoliation and entropy. Many of the poems embody a nexus of interaction with historical events, films, modernist poetic texts, and works of art—but from this allusion and evocation, a multifarious voice emerges. In these pages, the electric linguistic experiment meets a new urban, postnatural poetics, one in which poetry is not just a play of signs and seemings but also a prismatic investigation of our contemporary order: "Hurry up before our factory leaves. / The first column of the Freedom Tower / traduces its ensorcellment in the facade." Here is a poetry both deeply lyrical and resistant, a poetry relentless in its invention and its stance against the apathy of convention and consumption.

David Lau teaches writing at the University of California, Santa Cruz, and Cabrillo College. His poems have appeared in Boston Review, New Orleans Review, Wildlife, and other magazines.

“For those willing to experience poetry without requiring a rational explanation, Virgil and the Mountain Cat is filled with shock, curiosity, and delight.”—Believer

"Virgil and the Mountain Cat, David Lau's first book of poems, evokes the shattering of Western civilization (not its collapse, but the tense, apprehensive moment before the cracked vessel falls apart). What commanded trust now provokes a nihilistic retaliatory mischief-making poetic language, in which the only redemptive element, if there is one, is what Alain Badiou calls the 'engine' of excess in the greatest 20th century art, excess of the kind that allows for change, a revolution. Lau's high-voltage language is a measure of the passion of (and for) belief that has been lost. Lau is a remarkable young poet."—Calvin Bedient, author of Candy Necklace

"It's after the end of the world, and David Lau is our last first poet of the future past. When words have nowhere left to go, they need a new Virgil to guide them sideways in time, to where they can become ferociously fractal as the cry of a mountain cat. The microtonal resistances of Lau's language both remove and remotivate meaning: what the poet 'saw was raw war.' David Lau's work enacts a great refusal that lights fuses beneath the psycho-political dome."—Andrew Joron, author of The Sound Mirror


"The scary accomplishment of Virgil and the Mountain Cat is to remind a reader that poetry has the capacity to disturb, rather than calm, one's nervous system. Lau's poems are knowing and proficient and care nothing for your feelings. Punk in its spirit, sure to prove alienating to most readers over thirty, and spoken from a place deep 'inside the annotations,' this book is an unforgiving glimpse of the horizonless present."—Mark Levine, author of The Wilds
Read More >

I
Prosopopeia
Day to Start on the Floorboards, Rain to the South, Any View a Machine
New Organic Shifts
Suburbatross
Immortality
Going Out
Man with Archiving Machine
Iovis Omnia Plena
Happiness Is for the Terrestre
Many Jasons
Absolute, The
Tell Pearl
The Tupperware Concerto
Black Line Drawing