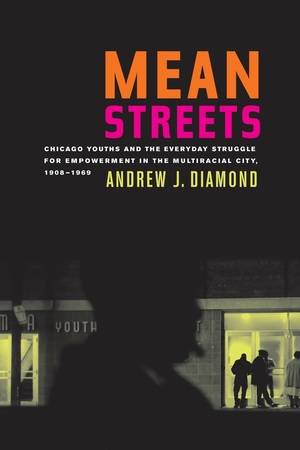 Mean Streets Chicago Youths and the Everyday Struggle for Empowerment in the Multiracial City, 1908-1969

Mean Streets focuses on the streets, parks, schools, and commercial venues of Chicago from the era of the 1919 race riot to the civil rights battles of the 1960s to cast a new light on street gangs and to place youths at the center of the twentieth-century American experience. Andrew J. Diamond breaks new ground by showing that teens and young adults stood at the vanguard of grassroots mobilizations in working-class Chicago, playing key roles in the formation of racial identities as they defended neighborhood boundaries. Drawing from a wide range of sources to capture the experiences of young Mexicans, Puerto Ricans, African Americans, Italians, Poles, and others in the multiracial city, Diamond argues that Chicago youths gained a sense of themselves in opposition to others.

Over the past few days, we received an influx of requests from faculty for books that provide context around the tragic events in Charlottesville. We’ve curated the list of titles below. Our …

Andrew J. Diamond is Associate Professor of American History and Civilization at the Université Charles de Gaulle - Lille 3 in France.

“Diamond contends that young Euro-American men forged their masculine and racial identities and created distinctive youth subcultures around their encounters with the colour line.”—Urban History

"In Mean Streets Andrew J. Diamond offers a fascinating, meticulous, and entertaining account of the relationship between youths, street culture, race, and racial violence in twentieth-century Chicago."—Journal Of American History

“Diamond’s engaging writing allows him to weave a rich tapestry about life in this multiracial city.”—Journal Of African American History

"Diamond has produced a book that will prove central to understanding Chicago, urban culture, and the role that youth gangs have played in their development."—H-Net Reviews

“Sugrue, Hirsch, Robert Self, and now Diamond...offer sophisticated understandngs of the origins of ‘a new configuration of inequality with rearranged features’.”—Journal Of Urban History

"In Mean Streets [Diamond] draws on a deep well of research to tell the stories behind groups from Ragen's Colts—a Bridgeport gang that specialized in sports, street thuggery, and vote production on election days during the 1910s and 1920s—to the Vice Lords, west-siders who branched out from gangbanging to black empowerment in the 60s, as well as the many nameless mobs and delinquents whose crude social protest over the years enforced the city's color lines."—Chicago Reader

"[T]he value of this work for sociology rests in its unpacking the phenomenon of young people’s investment in the urban sphere, and the social turbulence associated with it, without surrendering to blanket indictments of youth nor racial and ethnic group culture. Diamond illustrates how action on the part of these people involved conscientious decision-making as much as, if not more than, sheer emotional impulse. Consequently, this book invites more thinking about how modernity, policy, and the urban sphere connected at various points in time to shape the reactions of groups of young men such that a more formidable historical foundation is provided for grappling with the lingering idea that youth in cities are a troubled, and troubling, constituency."—Alford A. Young, Jr. Contemporary Sociology

"In a city that social scientists feel we know well, Mean Streets provides new and exciting insights into the spatial dimensions of urban life. Not afraid to talk about both attraction and repulsion, Diamond provocatively unearths the critical role of youths—ages 15 to 25—in leading their wider communities in the negotiation of race."—George Sanchez, author of Becoming Mexican American: Ethnicity, Culture, and Identity in Chicano Los Angeles 1900-1945

"In Mean Streets, Andrew Diamond brilliantly bridges social, political, and cultural history. His deeply researched account of Chicago's black, white, and Latino youth subcultures offers a fresh perspective on the entangled histories of identity, power, and place. This is a first-rate book."—Thomas J. Sugrue, author of Sweet Land of Liberty: The Forgotten Struggle for Civil Rights in the North.

"This excellent social history of Chicago's youth gangs not only demonstrates their centrality to the vaunted community and turf consciousness of the city's neighborhoods; it also explains the widespread ethnic and racial conflict that has characterized the city for most of the twentieth century. Diamond accomplishes this with a remarkable amount of empirical research on the gritty streets, playgrounds and parks, dance halls, 'can houses' (brothels), and industrial wastelands in, between, and around these neighborhoods."—James R. Barrett, author of Work and Community in 'The Jungle': Chicago's Packing House Workers, 1894-1922.

1. The Generation of 1919
2. Between School and Work in the Interwar Years
3. Hoodlums and Zoot-Suiters: Fear, Youth, and Militancy during Wartime
4. Angry Young Men: Race, Class, and Masculinity in the Postwar Years
5. Teenage Terrorism, Fighting Gangs, and Collective Action in the Era of Civil Rights
6. Youth and Power