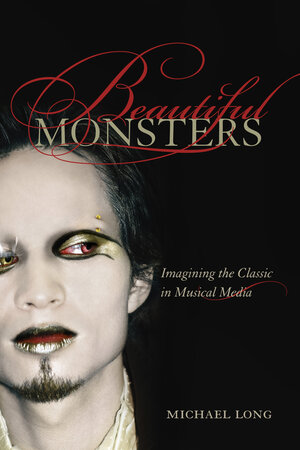 Beautiful Monsters explores the ways in which "classical" music made its way into late twentieth-century American mainstream culture—in pop songs, movie scores, and print media. Beginning in the 1960s, Michael Long's entertaining and illuminating book surveys a complex cultural field and draws connections between "classical music" (as the phrase is understood in the United States) and selected "monster hits" of popular music. Addressing such wide-ranging subjects as surf music, Yiddish theater, Hollywood film scores, Freddie Mercury, Alfred Hitchcock, psychedelia, rap, disco, and video games, Long proposes a holistic musicology in which disparate musical elements might be brought together in dynamic and humane conversation. Beautiful Monsters brilliantly considers the ways in which critical commonplaces like nostalgia, sentiment, triviality, and excess might be applied with greater nuance to musical media and media reception. It takes into account twentieth-century media's capacity to suggest visual and acoustical depth and the redemptive possibilities that lie beyond the surface elements of filmic narrative or musical style, showing us what a truly global view of late twentieth-century music in its manifold cultural and social contexts might be like.

Michael Long is Associate Professor of Musicology at the University at Buffalo, State University of New York.

“This extraordinary work demands and deserves to be read and re-read, time and again, for the ideas presented here are innovative, thought provoking, and among the freshest and most exciting to emerge in recent years.”—Ellen Flint American Music Teacher

“At the heart of this brilliant . . . and rewarding book is an aesthetic vision of what classical music has come to mean.”—Journal Of The Society For American Music (Jsam)

“Long has succeeded in that most welcome of humanistic scholarly achievements: to take a much-studied and familiar thing and find an original and persuasive way to see it, to hear it, and to understand it.”—Journal Of Musicological Research

"A virtuoso performance. In this work of vastly erudite cultural imagination, Long both dazzles and illuminates. He has fashioned, in elegant prose, a thrilling mosaic of critical interpretation, one that is assured a central place on the leading edge of music scholarship."—Albin Zak, author of The Poetics of Rock: Cutting Tracks Making Records

Part One. Registering the Classic
1. The Expressive Vernacular
2. Making Overtures
3. Yiddishkeit and the Musical Ethics of Cinema

Part Two. Envisioning the Classic
4. Hearing Monsters
5. The Fantastic, the Picturesque, and the Dimensions of Nostalgia
6. Listening in Dark Places
7. Concertos, Symphonies, Rhapsodies (and an Opera)