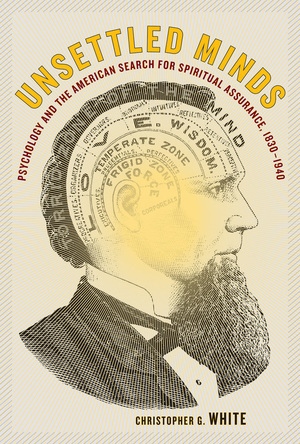 Unsettled Minds Psychology and the American Search for Spiritual Assurance, 1830-1940

This book examines how nineteenth- and twentieth-century American believers rejected older, often evangelical, theological traditions and turned to scientific psychologies to formulate new ideas about mind and spirit and new practices for spiritual growth. Christopher G. White looks in particular at how a group of liberal believers—including William James and G. Stanley Hall—turned away from traditional Christian orthodoxies and built a revised religious identity based on new psychological motifs and therapies. Unsettled Minds is the first book to explain the dramatic rise of new spiritualities of the mind, spiritualities that, by the early twenty-first century, were turning eagerly to scientific and clinical psychological studies to reimagine religion and the problems of religious uncertainty.

“A valuable and original perspective on the ongoing vitality of the religious impulse in American culture.”—E. S. Steele Choice

Outstanding volume . . .. Unsettled Minds is a significant alternative narrative of the new psychology. . . . This religious side of the new psychology—precisely the sort of thing that presentist historiography has traditionally expunged from its own accounts—was the very heartbeat of the new science. White has done us a great service by so clearly demonstrating that this was indeed the case.”—Journal Of The History Of Behavioral Sciences

"Christopher White's Unsettled Minds makes clear how important new psychologies of religion were for those Protestants navigating their way out of Calvinism and evangelical revivalism. Just as his religious liberals remapped mind and spirit, White has remapped the historical terrain of religion and psychology in American culture. He spotlights not a cultural world absorbed with ecstasy, altered states, or mythic depths, but instead one riveted on measured stages of spiritual growth and effective habits of self-discipline."—Leigh Eric Schmidt, Princeton University


"An important contribution to the growing literature on the history of religious experience and of the distinctive dynamics of Christian interiority in the modern U.S."—Robert Orsi, Northwestern University

"Today, when brain researchers and psychologists are again attempting to explain religion, this remarkable study suggests that we should not be surprised to see religious believers creatively embracing new scientific findings and making use of them for religious purposes unexpected by scientists."—Ann Taves, author of Fits, Trances, and Visions