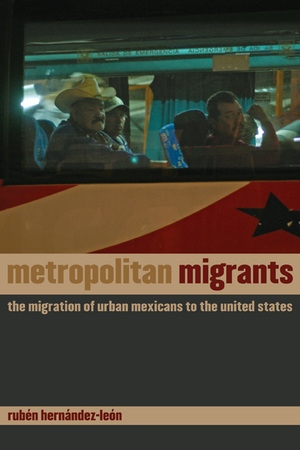 Metropolitan Migrants The Migration of Urban Mexicans to the United States

Challenging many common perceptions, this is the first book fully dedicated to understanding a major new phenomenon—the large numbers of skilled urban workers who are now coming across the border from Mexico's cities. Based on a ten-year, on-the-ground study of one working-class neighborhood in Monterrey, Mexico's industrial powerhouse and third-largest city, Metropolitan Migrants explores the ways in which Mexico's economic restructuring and the industrial modernization of the past three decades have pushed a new flow of migrants toward cities such as Houston, Texas, the global capital of the oil industry. Weaving together rich details of everyday life with a lucid analysis of Mexico's political economy, Rubén Hernández-León deftly traces the effects of restructuring on the lives of the working class, from the national level to the kitchen table.

Rubén Hernández-León is Assistant Professor of Sociology at the University of California, Los Angeles.

"Metropolitan Migrants is an important and finely etched study of the migratory circuit between Monterrey, Mexico's third largest city, and Houston, the third largest concentration of Mexican immigrants in the U.S. Based on long-term multi-site and multi-method research, the book provides an insightful analysis of the origins of the Monterrey-Houston link; shows how social networks and migration entrepreneurs facilitate and sustain the movement; and examines the role of legal status in shaping cross-border connections. By shedding light on one migratory circuit, Rubén Hernández-León illuminates issues of great relevance for our understanding of migration generally."—Nancy Foner, author of In a New Land: A Comparative View of Immigration

"Focusing on economic restructuring, and on the diversity of social networks and communities, Hernández-León's rigorous research provides us with important new insights into the processes characterizing urban-origin Mexican migration to the United States. This is a much-needed addition to the scholarship on Mexican immigration."—Pierette Hondagneu-Sotelo, author of Doméstica: Immigrant Workers Cleaning and Caring in the Shadows of Affluence

"This carefully researched, clearly argued, and richly detailed study makes a significant contribution not only to studies of Mexican migration but to the field of migration in general and, as such, it will command the attention of anyone seriously interested in the study of migration. Through sharp analysis, Hernández-León illuminates key social threads that link Mexican urbanites' migration to Mexico's economic restructuring. It is a fresh and insightful book that reminds us that there are still many interesting stories to tell about U.S.-bound Mexican migration."—Cecilia Menjivar, author of Fragmented Ties: Salvadoran Immigrant Networks in America


"Metropolitan Migrants is the best study ever done of urban migrants from Mexico to the United States, an increasingly important component of the total migratory flow. Hernández-León's imaginative and expert combination of sources and methodologies fills in a key piece of the puzzle of Mexican immigration that should interest policymakers and the public as well as academics."—Douglas S. Massey, Office of Population Research, Princeton University

"Mexico is changing. In Metropolitan Migrants, Rubén Hernández-León exposes the deteriorating economic conditions in Mexico's industrial heartland that have impelled formerly secure urban workers to undertake international migration as their rural co-nationals have long done. Contradicting previous thinking, he also shows that settled urban workers can form migratory networks as effective as those deployed by rural Mexicans. Examining the Monterrey to Houston connection, Hernández-León provides the most advanced documentation anywhere of the contribution of emergent van and bus lines to the self-propagation of network-driven migration. Expanding and enhancing our understanding of Mexican migration generally, Metropolitan Migrants will prove especially valuable to those wishing to comprehend the migratory process south of the border." —Ivan Light, University of California, Los Angeles

"In his latest book titled Metropolitan Migrants: The Migration of Urban Mexicans to the United States, Rubén Hernández-León demonstrates why he is one of the leading scholars studying Mexican migrants in the United States and Mexico today. In his book, Hernández-León masterfully illustrates the links between economic restructuring in Monterrey and the ensuing movement of many of its workers, who previously enjoyed the comforts of stable employment with decent wages and benefits, to places such as Houston. This is a must-read for scholars, policymakers, and the general public who want to better understand how global forces stimulate migration from developing to developed countries."—Rogelio Saenz, Texas A&M University
Read More >

List of Illustrations
Acknowledgments
Map of Monterrey and Houston