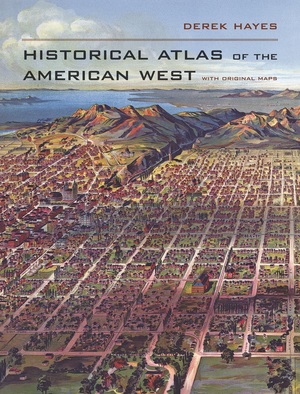 Historical Atlas of the American West With Original Maps

Spectacular in scope and visually brilliant, this atlas presents a sweeping history of the American West through more than 600 original, full-color maps and extended captions. From the earliest human inhabitants and the first European explorers to the national parks and retirement resorts of today, this extensive collection chronicles the West from uncharted territory to a well-populated Eden. We bear witness as state lines strike through Native American territories, see the frontier crack open and the railroad's iron belt snake across the Plains, and watch as the West's cities, from Los Angeles to Las Vegas and Albuquerque to Anchorage, rise and prosper. This is the first atlas to compile all the historically significant maps relating to the American West; it includes field sketches of battles, the first maps to show the West, maps depicting mythical rivers and fictional towns, and maps showing early conceptions of California as an island. Distilling many centuries into one fascinating volume, this atlas traces history as redwoods, mountains, and deserts become California, Montana, and Arizona, and offers a rare opportunity to see the west through the eyes of its earliest explorers.

“Maps that engage both the viewers' intellect and their aesthetic sense. . . . A high quality publication at an amazingly low price. . . Highly recommended.”—Library Journal

“The maps are intriguing, and the accompanying text and captioned illustrations provide enough detail for the casual reader and context for the researcher.”—Booklist

“Historical Atlas of the American West is useful. . . [and] a worthwhile acquisition.”—Southern California Quarterly

“Anyone who loves gazing at vintage maps will enjoy spending hours with the Historical Atlas of the American West.”—Bookloons Reviews

“It deserves to hold a prominent place on the bookshelves of any who have even the smallest interest in past geographical interpretations of the American West.”—Andrew Dunlop Canadian Journal Of History

“A book that will provide hours of enjoyment, this oversized volume will delight anyone interested in western history.”—Bob Walch Coast Traveler

“[Hayes] takes the reader on a visually and intellectually stimulating tour of the American West across several hundred years of map making. The volume is well worth its incredibly low price.”—J Clark Archer Great Plains Qtly

“This volume is certainly an authoritative and attractive reference, worthy of the superlative scenery, captivating peoples, and powerful images that characterize the region.”—Kevin Blake Montana The Magazine Of Western History

“Anyone who loves gazing at vintage maps will enjoy spending hours with the Historical Atlas of the American West.”—Bob Walch Watsonville Register-Pajaronian

"These volumes hold something for everybody."—Oregon Historical Quarterly 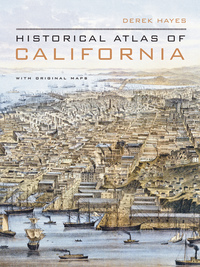