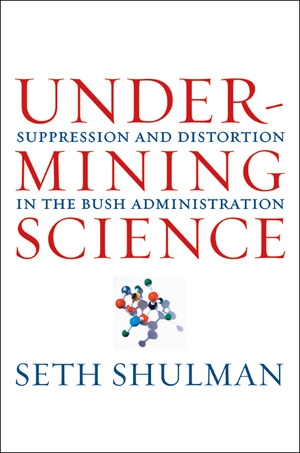 Undermining Science Suppression and Distortion in the Bush Administration, Updated with a New Preface

This vitally important exposé shows how the Bush administration has systematically misled Americans on a wide range of scientific issues affecting public health, foreign policy, and the environment by ignoring, suppressing, manipulating, or even distorting scientific research. It is the first book to focus exclusively on how this explosive issue has played out during the presidency of George W. Bush and the first to comprehensively document his administration's abuses of science. This paperback edition contains a new preface bringing to light the most up-to-date research on these abuses.

* The Bush administration’s abuse and misuse of science in areas including stem cell research, AIDS prevention, environmental protection, the Iraq war, the teaching of evolution, and global warming;

* The dangerous consequences of the Bush administration's war on science for the caliber and integrity of the nation's scientific research.

Seth Shulman is an award-winning journalist and author who has written for many magazines, including Nature, Smithsonian, the Atlantic, Discover, Rolling Stone, Parade, and Popular Science; and for newspapers including, the Times of London, the Boston Globe, and the Los Angeles Times. He is the author of books including The Threat at Home: Confronting the Toxic Legacy of the U.S. Military.

“Exhaustively sourced and researched, Shulman’s book leaves no doubt that the integrity of government research is under attack. . . . A work of timely muckraking.””—Discover Magazine

“A concise, straightforward case history of the politicization of science.”—Nature

“Combining thorough research with lucid prose and a sense of mounting outrage, [Shulman] charges that the president's appointees and advisers are not only threatening the scientific enterprise but also American democracy itself. . . . Shulman's consolidation of these tales of manipulation, intimidation and deception makes for disquieting reading.”—Publishers Weekly

"Shulman's remarkably well-documented litany of abuses should serve as a wake-up call not only to society, but also to political leaders, who cannot govern for long without independent scientific expertise grounded in unquestioned integrity."—Simon Levin, Center for BioComplexity, Princeton University