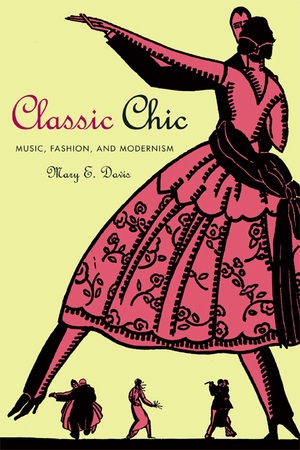 Music and fashion: the deep connection between these two expressive worlds is firmly entrenched. Yet little attention has been paid to the association of sound and style in the early twentieth century—a period of remarkable and often parallel developments in both high fashion and the arts, including music. This beautifully written book, lavishly illustrated with fashion plates and photographs, explores the relationship between music and fashion, elegantly charting the importance of these arts to the rise of transatlantic modernism. Focusing on the emergence of the movement known as Neoclassicism, Mary E. Davis demonstrates that new aesthetic approaches were related to fashion in a manner that was perfectly attuned to the tastes of jazz-age sophisticates. Looking in particular at three couturiers—Paul Poiret, Germaine Bongard, and Coco Chanel—and three breakthrough fashion magazines—La Gazette du Bon Ton, Vanity Fair, and Vogue—Davis illuminates for the first time the ways in which fashion's imperatives of originality and constant change influenced composers such as Erik Satie, Igor Stravinsky, and Les Six. She also considers the role played by the Ballets Russes, and explores the contributions of artists including costume and set designer Léon Bakst, writer and director Jean Cocteau, Amédée Ozenfant, and Pablo Picasso. The first study to situate music in this rich context, Classic Chic demonstrates the profound importance of the linked endeavors of composition and couture to modernist thought. In addition to its innovative approach to this important moment in history, Davis's focus on the social aspects of the story makes the book a tremendously engaging read.

Mary E. Davis is Associate Professor in the Department of Music at Case Western Reserve University.

“Engaging . . . . A good book, one certainly worth reading for the wealth of information it contains.”—Modernism/Modernity

“A fascinating study of what turns out to be a most intriguing subject.”—Musical Times

“An important and ambitious in-depth study and no one will come away from reading it without a greater understanding of a fascinating period in the history of modernism and fashion.”—Costume

“Classic Chic is a refreshing look at Parisian culture at the turn of the century. . . . A fine addition to the interdisciplinary realm.”—Carissa M. Pitkin Music Research Forum

“An intriguing study for anyone interested in the connections between early 20th century fashion and music.”—The Atlantan

"Mary E. Davis's Classic Chic: Music, Fashion, and Modernism is a fascinating study that draws together several strands of international modernism in the first quarter of the twentieth century. Focusing on trendsetting couturiers and magazines, she reveals how fashion not only promoted modernist trends in music but also identified those trends with a 'modern' upper-class lifestyle as well as similar trends in the visual arts and ballet. Davis has written a page-turner that talks about serious matters and adds to the sum of our knowledge about early twentieth-century musical culture."—Lynn Garafola, author of Diaghilev's Ballets Russes and Legacies of Twentieth-Century Dance


"In Classic Chic: Music, Fashion, and Modernism, Mary Davis examines the deep connections between music and other cultural phenomena - especially fashion - in early 20th-century France. She returns the music of Satie and Stravinsky to its native Parisian habitat, which swarmed with fashion designers, trend-setting collaborators, and the purveyors of taste who determined what at any moment counted as 'chic.' (How dreadfully un-German!) Classic Chic joins a very small number of books that both break new scholarly ground and also appeal to general readers: in particular, those willing to listen to Gymnopédies while flipping through the pages of Vanity Fair."—Susan McClary, author of Conventional Wisdom: The Content of Musical Form

"Classic Chic is an original and fascinating exploration of the surprising alliance of music and fashion in the early twentieth century. Mary Davis has made an important contribution to our understanding of modernism through a subtle analysis of supposedly 'frivolous and ephemeral' art forms."—Valerie Steele, Director and Chief Curator, The Museum at Fashion Institute of Technology