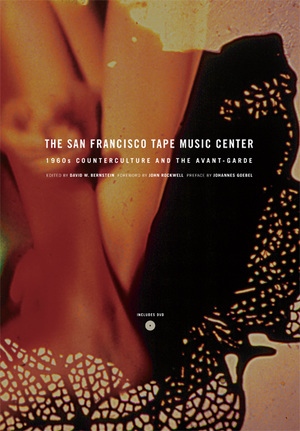 David W. Bernstein is Professor of Music and Head of the Music Department at Mills College. He is coeditor, with Christopher Hatch, of Writings Through John Cage’s Music, Poetry, and Art and Music Theory and the Exploration of the Past.

“An outlandish episode on nearly every page of this book. . . . A probing account.”—Los Angeles Times

“The excitement of exploration and the delight in fortuitous accident come through in the many firstperson accounts and interviews which make up the bulk of David W. Bernstein's marvellous account of the Center.”—Times Literary Supplement (TLS)

“Provides the first comprehensive history of the Tape Music Center . . . . The collision of historically incompatible characters is hard to believe: It is a Kevin Bacon game . . . of avant-garde and pop culture in the ‘60s.”—Cory Arcangel Artforum

“This volume provides a rich and multilayered history of the San Francisco Tape Music Center, and the many scholars and artists involved in its production should be proud to have created a lasting document of this significant period of activity in twentieth-century intermedia music and art. In the process they have shed light on a little-discussed corner of 1960s counterculture in the United States.”—Journal Of The Society For American Music (Jsam)

“From its handsome design to its wealth of vibrant photos, [this book] stands apart from the usual academic press fare, which is fitting considering its subject. . . . A document of ballsy innovation and gutsy invention.”—Skyscraper

“Lively . . . [It} not only deflates the notion of New York as the center of experimental music innovation in the second half of the 20th century, but testifies to the ingenuity and invention of a ragtag band of composers, musicians, dancers, visual artists, and explorers.”—The Score

"Who knew, prior to this lovingly detailed account, that five musical discontents could construct what amounted to a cultural particle accelerator in a small San Franciscan house? This book allows readers a window onto the confluence of artistry, innovation, drugs, sexuality, poverty, resourcefulness and, most importantly, the sense of fun that permeated the air during those years."—Richard Henderson, critic for The Wire magazine

"As I devoured this vibrantly detailed history of the San Francisco Tape Music Center in the 1960s, I found myself wishing repeatedly that I'd been born a couple of decades earlier, so I could have been present for a string of historic events: the debut of the Don Buchla synthesizer, the premiere of Terry Riley's In C, Ramon Sender's Tropical Fish Opera, Pauline Oliveros's multimedia concert at the Trips Festival. The heroes of the Center were in the business of realizing unimagined possibilities, and they did much to shape the legendary culture of San Francisco in the later sixties."—Alex Ross

"Hats off to David Bernstein for flooding a dark corner of recent musical history with new light, as warm as it is brilliant."—Richard Taruskin, author of The Oxford History of Western Music

"This high-voltage oral history takes us straight back to the West Coast epicenter of experimental music in the early 1960s, where synthesizers and tape loops met light shows and LSD, and Merry Pranksters hung with the masters of minimalism. Reading it is like visiting a foreign country and realizing you were born there."—Fred Turner, author of From Counterculture to Cyberculture: Stewart Brand, the Whole Earth Network, and the Rise of Digital Utopianism

Foreword, by John Rockwell
Then, Now, and Then Again (A Preface), by Johannes Goebel
Introduction, by David W. Bernstein