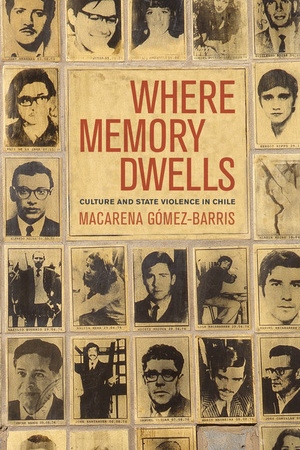 Where Memory Dwells Culture and State Violence in Chile

The 1973 military coup in Chile deposed the democratically elected Salvador Allende and installed a dictatorship that terrorized the country for almost twenty years. Subsequent efforts to come to terms with the national trauma have resulted in an outpouring of fiction, art, film, and drama. In this ethnography, Macarena Gómez-Barris examines cultural sites and representations in postdictatorship Chile—what she calls "memory symbolics"—to uncover the impact of state-sponsored violence. She surveys the concentration camp turned memorial park, Villa Grimaldi, documentary films, the torture paintings of Guillermo Núñez, and art by Chilean exiles, arguing that two contradictory forces are at work: a desire to forget the experiences and the victims, and a powerful need to remember and memorialize them. By linking culture, nation, and identity, Gómez-Barris shows how those most affected by the legacies of the dictatorship continue to live with the presence of violence in their bodies, in their daily lives, and in the identities they pass down to younger generations.

Macarena Gómez-Barris is Assistant Professor of Sociology and American Studies and Ethnicity at the University of Southern California.

“This book is a solid and original contribution to the expanding work on the construction of memory in Chile.”—The Americas

"Where Memory Dwells is a crucial contribution to the current debate on political violence. Macarena Gómez-Barris has researched exhaustively on the Chilean post-dictatorship to find the deep relationship between what happened in Chile on September 11, 1973 and what is going on today, in Chile and in the world."—Sergio Villalobos-Ruminott, University of Arkansas

"This book offers intriguing insights on the symbolic, aesthetic, and personal aspects of memory-making by activists, survivors, and artists during the afterlife of the Pinochet dictatorship. The author shows how specific cultural actors wrestle creatively with the dilemma of how to represent experiences of atrocity that defy our ability to know, narrate, and depict them, yet prove crucial to the building of a democratic culture."—Steve Stern, Alberto Flores Galindo Professor, University of Wisconsin

"Macarena Gomez-Barris takes the reader on an often personal journey through the 'memoryscape of terror' of the Chilean dictatorship in Chile and Chilean culture in exile. This book makes a poignant and compelling contribution to the study of traumatic memory in Latin America."—Marita Sturken, Professor of Media, Culture and Communication studies, New York University

"Where Memory Dwells offers an immensely luminous rearticulation of the 1990s 'politics of memory' theme for the twenty-first century. Illustrating the profound relevance of memory studies to political theory, Gómez-Barris shows with great lucidity how the remembering and forgetting of state terror are entwined with global and local forces of the neoliberal economy, nationalism, and universal human rights discourse. Where Memory Dwells exemplifies the best efforts of a sociological approach to memory as cultural mediation of power. It should be read by anyone interested in the critical work that collective memory may perform for our societies in transition.”—Lisa Yoneyama, Author of Hiroshima Traces: Time, Space, and the Dialectics of Memory


"Where Memory Dwells is a creatively researched and exquisitely thoughtful study of the memory of state terror as it lives and hides in complex and politically activated cultural practices. Gómez-Barris's exploration of how authoritarianism and social injustice are remembered, forgotten, and redressed by nations, citizens, and exiles is a beautiful achievement, one with an immediate relevance for us today."—Avery F. Gordon, author of Ghostly Matters
Read More >