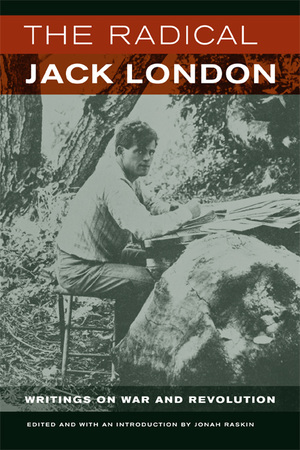 The Radical Jack London Writings on War and Revolution

"Big things are happening secretly all around," says Jack London's prescient hero Ernest Everhard in the 1908 novel The Iron Heel, excerpted in this timely anthology of London's writings about war and revolution. Besides illuminating his surprising literary range, The Radical Jack London establishes the iconic American author as both a product of his own era and a significant voice for ours. The book features works by London that have been unavailable for decades. In his insightful introduction, editor Jonah Raskin lays out the social, economic, and political contexts for London's polemical writings and shows London to be America's leading revolutionary writer at the turn of the twentieth century.

Jack London (1876-1916) was the author of The Call of the Wild (1903), The Sea-Wolf (1904), and the prophetic novel The Iron Heel (1908), among some fifty books. Jonah Raskin is Chair of Communications at Sonoma State University and produces the website radicaljacklondon.com.

“This anthology makes a good argument for refreshing [Jack London’s] relevance as a polemicist.”—Morning News

“Resonates powerfully with our contemporary political culture. . . . A must for London lovers, and people who really want to know about American politics—this book might even influence your vote.”—North Bay Bohemian

“A must for London lovers, and people who really want to know about American politics--this book might even influence your vote.”—C.E. McAuley Bohemian.com

“Raskin provides excellent introductions, to both the book as a whole and each passage.”—Choice

“The book features works by the legendary Oakland writer that no one has seen for decades, illustrating London’s importance as a revolutionary thinker.”—East Bay Monthly

“Marked with careful scholarship and an ability to digest a mass of material and [Raskin writes] about it clearly and convincingly. . . . A timely and valuable book.”—Redwood Coast Review

“[Raskin] has assembled a near-perfect selection of London's radical writings. [He] captures the spirit and dynamics of London's life in ways that the majority of full-length London biographies do not.”—San Francisco Chronicle

"This splendid volume does more than reinstate Jack London as a leading voice of the American cultural left. Jonah Raskin documents how London struggled to reconcile his political and his personal desires, creating memorable art but failing to save himself. One of the world's most popular writers comes alive, in all his passion and agony."—Michael Kazin, author of A Godly Hero: The Life of William Jennings Bryan

"In this well conceptualized anthology, Jonah Raskin has resurrected works that have been unavailable for decades, making The Radical Jack London a very timely presence for the twenty-first century. Raskin's own writing is forceful and engaging, and he is unblinkingly honest about London as person and as writer, never succumbing to romanticizing or whitewashing the picture of either."—H. Bruce Franklin, John Cotton Dana Professor of English and American Studies, Rutgers University

"Jack London always knew how to bang a righteous drum of social indignation, and in The Radical Jack London he can make your heart pound even today."—Paul Berman, author of Power and the Idealists and editor of Carl Sandburg: Selected Poems

Introduction: Jack London: The Orphan at the Abyss

PART I BOY SOCIALIST, 1895–1899
Pessimism, Optimism and Patriotism
What Socialism Is
The Voters’ Voice
Socialistic Views
The Road
The Question of the Maximum

PART II COMRADE WHITE MAN, 1900–1905
The Economics of the Klondike
Incarnation of Push and Go
The Salt of the Earth
The People of the Abyss, Chapter 1: The Descent
How I Became a Socialist
What Shall Be Done with !is Boy?
Japanese O9cers Consider Everything a Military Secret
Revolution