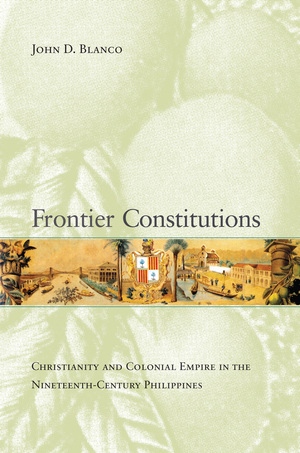 Frontier Constitutions Christianity and Colonial Empire in the Nineteenth-Century Philippines

Frontier Constitutions is a pathbreaking study of the cultural transformations arrived at by Spanish colonists, native-born creoles, mestizos (Chinese and Spanish), and indigenous colonial subjects in the Philippines during the crisis of colonial hegemony in the nineteenth century, and the social anomie that resulted from this crisis in law and politics. John D. Blanco argues that modernity in the colonial Philippines should not be understood as an imperfect version of a European model but as a unique set of expressions emerging out of contradictions—expressions that sanctioned new political communities formed around the precariousness of Spanish rule. Blanco shows how artists and writers struggled to synthesize these contradictions as they attempted to secure the colonial order or, conversely, to achieve Philippine independence.

“Blanco keenly addresses the challenges and contradictions presented by Spanish colonialism in the age of enlightenment, modernity, and the birth of liberalism.”—Philippine Studies

"The value of this book's contribution to the comparative history of colonial cultures is indubitable, and its theoretical arguments are richly suggestive beyond its immediate sphere. This will be not only a crucial intervention in Philippine studies, but also one of real importance to the comparative study of colonialism, transnational modernities, and nationalism."—David Lloyd, author of Anomalous States: Irish Writing and the Postcolonial Moment and Ireland After History