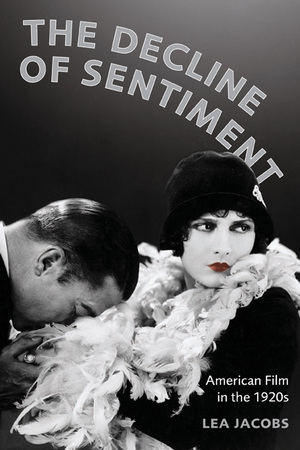 The Decline of Sentiment American Film in the 1920s

The Decline of Sentiment seeks to characterize the radical shifts in taste that transformed American film in the jazz age. Based upon extensive reading of trade papers and the popular press of the day, Lea Jacobs documents the films and film genres that were considered old-fashioned, as well as those dubbed innovative and up-to-date, and looks closely at the works of filmmakers such as Erich von Stroheim, Charlie Chaplin, Ernst Lubitsch, and Monta Bell, among many others. Her analysis—focusing on the influence of literary naturalism on the cinema, the emergence of sophisticated comedy, and the progressive alteration of the male adventure story and the seduction plot—is a comprehensive account of the modernization of classical Hollywood film style and narrative form.

Lea Jacobs is Professor in the Department of Communication Arts at the University of Wisconsin-Madison. She is author of The Wages of Sin: Censorship and the Fallen Woman Film, 1929-1942 (UC Press) and Theatre to Cinema: Stage Pictorialism and the Early Feature Film.

“A groundbreaking examination of a pivotal turning point in American cinema. . . . Jacobs’ thoroughly researched arguments make her thesis as convincing as it is original. . . . A formidable achievement.”—American Cinematographer

“Lea Jacobs's groundbreaking book examines the crucial films, both well-known and until now obscure, that marked a decisive shift in 1920s American cinematic sensibility and taste-from 'hokum' to 'sophistication,' a change that would inflect future Hollywood filmmaking. All serious scholars of American film history will read this book with admiration and find its insights as well as its methods an inspiration.”—Matthew Bernstein, author of Walter Wanger: Hollywood Independent

"The Decline of Sentiment is an impressively researched and quite original book. Again and again, Jacobs makes persuasive arguments. This is an outstanding contribution to scholarship."—James Naremore, author of More Than Night: Film Noir in its Contexts