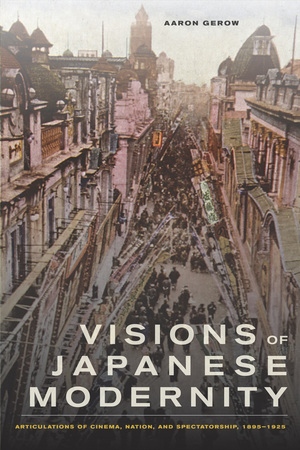 Visions of Japanese Modernity Articulations of Cinema, Nation, and Spectatorship, 1895-1925

Japan has done marvelous things with cinema, giving the world the likes of Kurosawa, Mizoguchi, and Ozu. But cinema did not arrive in Japan fully formed at the end of the nineteenth century, nor was it simply adopted into an ages-old culture. Aaron Gerow explores the processes by which film was defined, transformed, and adapted during its first three decades in Japan. He focuses in particular on how one trend in criticism, the Pure Film Movement, changed not only the way films were made, but also how they were conceived. Looking closely at the work of critics, theorists, intellectuals, benshi artists, educators, police, and censors, Gerow finds that this trend established a way of thinking about cinema that would reign in Japan for much of the twentieth century.

Aaron Gerow is Associate Professor of Japanese Cinema in the Film Studies Program and East Asian Languages and Literatures at Yale University. He is the author of Kitano Takeshi, A Page of Madness: Cinema and Modernity in 1920s Japan, and Reference Guide to Japanese Film Studies, coauthored with Abé Mark Nornes.

“The author offers not just a history of early Japanese cinema but also a history of Japanese film studies that describes the struggles to define cinema, control spectatorship, and articulate modernity.”—Choice

“Remarkable for it breadth and precision.”—Alexander Jacoby Sight & Sound Magazine

“The book has a wealth of information and is easy to go back into.”—Vili Maunula Akirakurosawa.info

"Visions of Japanese Modernity is the single best account of the formation of Japanese cinema. Deftly drawing on film discourses, regulations, and exhibition practices, it brilliantly brings into focus one of the most exuberant and contested moments in the history of cinema. It not only sets new standards for film history but also plants the seeds for a counterhistory to cinema as such."—Thomas LaMarre, author of The Anime Machine: A Media Theory of Animation

"In this landmark study, Aaron Gerow richly demonstrates the vibrancy of Japanese film culture as no book has done before. Visions of Japanese Modernity is centered on the contentious Pure Film Movement, and the transformations it helped provoke in performance, screenwriting, censorship, film style, and benshi oratory. With virtually no extant films to work with, Gerow strategically turns to a multitude of other sources, including fanzines, popular movie magazines, sociological studies, government regulations, and impressive works of early film theory. Rich in detail and lucidly argued, Visions of Modernity provides a model for writing about filmmaking in its social, political and aesthetic contexts."—Abé Mark Nornes, author of Cinema Babel: Translating Global Cinema


"Gerow offers not only a benchmark in the study of Japanese cinema, but a major contribution to world film history; a thoroughly researched and complexly argued 'discursive' history of early Japanese cinema, that avoids approaching it simply as an alternative to western cinema and reveals the unique role cinema played in the formulation of modern Japanese culture. Gerow makes clear the foundations of Japanese film history in the silent era—and how it shaped the complex and exciting national cinema that followed."—Tom Gunning, author of D.W. Griffith and the Origins of American Narrative Film
Read More >

1. The Motion Pictures as a Problem
2. Gonda Yasunosuke and the Promise of Film Study
3. Studying the Pure Film
4. The Subject of the Text: Benshi, Authors, and Industry
5. Managing the Internal