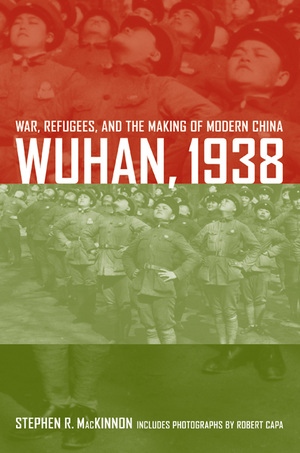 Wuhan, 1938 War, Refugees, and the Making of Modern China

During the spring of 1938, a flood of Chinese refugees displaced by the Anti-Japanese War (1937-1945) converged on the central Yangzi valley tricity complex of Wuhan. For ten remarkable months, in a highly charged atmosphere of carnage, heroism, and desperation, Wuhan held out against the Japanese in what would become a turning point in the war—and one that attracted international attention. Stephen MacKinnon for the first time tells the full story of Wuhan's defense and fall, and how the siege's aftermath led to new directions in the history of modern Chinese culture, society, and politics.

Stephen R. MacKinnon is Professor of History at Arizona State University. He is author of Power and Politics in Late Imperial China: Yuan Shi-Kai in Beijing and Tianhun, 1901-1908, and coauthor of China Reporting: An Oral History of American Journalism in the 1930s and 1940s and Agnes Smedley: The Life and Times of an American Radical, all published by UC Press. He is the editor, with Diana Lary and Ezra Vogel, of China at War: Regions of China, 1937-45, among other books.

“Read this slim and seductively informative book and recommend it to friends who are not China specialists.”—Asia Media

“This well-researched and well-written book offers much information.”—China Review International

“Read this slim and seductively informative book and recommend it to friends who are not China specialists.”—Charles W. Hayford Cutting Edge

"MacKinnon's study of Wuhan during its service as China's wartime capital not only fills an important gap in the history of China's war with Japan, but enriches this history through an artful combination of military, political, social and cultural perspectives."—Edward McCord, author of The Power of the Gun: The Emergence of Chinese Warlordism