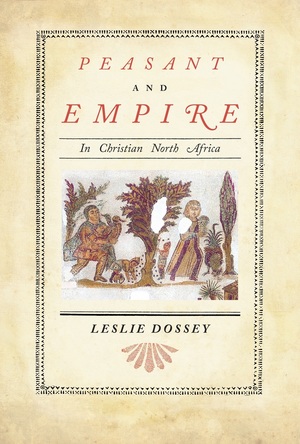 This remarkable history foregrounds the most marginal sector of the Roman population, the provincial peasantry, to paint a fascinating new picture of peasant society. Making use of detailed archaeological and textual evidence, Leslie Dossey examines the peasantry in relation to the upper classes in Christian North Africa, tracing that region's social and cultural history from the Punic times to the eve of the Islamic conquest. She demonstrates that during the period when Christianity was spreading to both city and countryside in North Africa, a convergence of economic interests narrowed the gap between the rustici and the urbani, creating a consumer revolution of sorts among the peasants. This book's postcolonial perspective points to the empowerment of the North African peasants and gives voice to lower social classes across the Roman world.

Leslie Dossey is Associate Professor of History at Loyola University of Chicago.

“This fine book breaks new ground in the use of evidence and in its bold interpretation of the interaction between agricultural workers and the Christian clergy in the development of civil and religious communities in the African countryside.”—J. Patout Burns Church History

“A groundbreaking work. . . . Dossey advances our understanding of the agricultural society of Christian North Africa and has made a major contribution to the study of this important facet of the later Roman Empire and the Vandals.”—Jesper Carlsen, University of Southern Denmark The Historian

“Fascinating. . . . Leslie Dossey has succeeded in producing an important study of North African peasants in Late Antiquity. . . . A valuable contribution to a growing body of scholarship.”—Eric Fournier, West Chester University of Pennsylvania Jrnl Of World History

“Powerful. . . . [Dossey] fills a major lacuna in understanding some of the greatest unresolved matters in Roman Africa. . . . A penetrating account of archaeological and source analysis. . . . Helpful to newcomers to this area of study and a healthful refresher for the experienced reader.”—M. A. Gaumer Ephemerides Theologicae Lovanienses