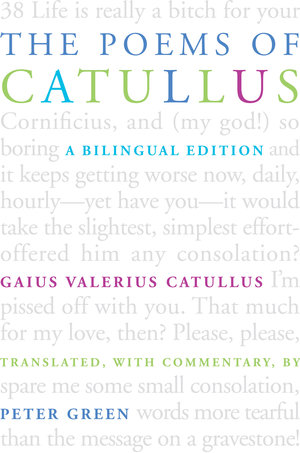 The Poems of Catullus A Bilingual Edition

Catullus, who lived during some of the most interesting and tumultuous years of the late Roman Republic, spent his short but intense life (?84-54 B.C.E.) in high Roman society, rubbing shoulders with various cultural and political luminaries, including Caesar, Cicero, and Pompey. Catullus's poetry is by turns ribald, lyric, romantic, satirical; sometimes obscene and always intelligent, it offers us vivid pictures of the poet's friends, enemies, and lovers. The verses to his friends are bitchy, funny, and affectionate; those to his enemies are often wonderfully nasty. Many poems brilliantly evoke his passionate affair with Lesbia, often identified as Clodia Metelli, a femme fatale ten years his senior and the smart, adulterous wife of an arrogant aristocrat. Cicero later claimed she poisoned her husband.

This new bilingual translation of Catullus's surviving poems by Peter Green is fresh, bawdy, and utterly engaging. Unlike its predecessors, it adheres to the principle that the rhythm of a poem, whether familiar or not, is among the most crucial elements for its full appreciation. Green provides an essay on the poet's life and literary background, a historical sketch of the politically fraught late Roman Republic in which Catullus lived, copious notes on the poems, a wide-ranging bibliography for further reading, and a full glossary.

Peter Green is Dougherty Centennial Professor Emeritus of Classics at the University of Texas at Austin and Adjunct Professor of Classics at the University of Iowa. He is the author of many books, including Alexander of Macedon, 356-323 B.C.: A Historical Biography (California, 1991) and Alexander to Actium: The Historical Evolution of the Hellenistic Age (California, 1990). His translations include Ovid's The Poems of Exile: Tristia and the Black Sea Letters (California, 2005), Juvenal's The Sixteen Satires (third edition, 1998), and Apollonios Rhodios's The Argonautika: The Story of Jason and the Quest for the Golden Fleece (California, 1997).

“Any fan of the Latin language, any student of the Roman Empire, which is so like and so unlike our own, must be grateful to Green and his publishers for such a useful and handsome book.”—Anthony Day Los Angeles Times

“It is a superb piece of work. . . . Green’s translation should encourage readers of all kinds to read or re-read Catullus, one of the greatest and most influential of all classical poets. . . . No translation is ever perfect. . . . If Green sometimes fails, it is more astonishing that he succeeds as well as he does. Like Catullus himself, Green combines vast ambitions with a likeable boyish insouciance. His energetic and bracingly intelligent translation will bring new readers to Catullus and will bring a new Catullus to readers who thought they knew him. It deserves, as Catullus said of his own book, to ‘outlast at least one generation!’”—Emily Wilson New Republic

“In Green’s scrupulous translations, we feel the very pulse of this brilliant poet. A truly exciting discovery.”—Tom D’evelyn Providence Journal

“Green is a celebrated classicist and his boyish enthusiasm is a perfect match for the bawdy ferocity of Catullus. . . . He perfectly captures Catullus’ voice-whose outrageousness may shock even the most jaded sophisticate. You don’t have to be a regular reader of poetry to like these poems.”—Meghan O’Rourke Slate Magazine

“The poet Catullus, a bon vivant in the waning days of the Roman Republic, employed his verse to comment on society, friends, enemies and his own often scandalous personal life. These new translations feature the poems in the original Latin on the obverse page.”—Washington Post Book World

"Peter Green is an outstanding translator. The reader’s excited anticipation of pleasure and instruction on receiving a new translation of a Latin poet by Green is not disappointed. This is a labor of love which makes Catullus accessible to the Latinless reader and more familiar to those who can read Latin."—Susan Treggiari, Stanford University

Introduction
Life and Background
Lesbia/Clodia
The Literary Context
The Text: Arrangement and Transmission
Reception and Reinterpretation
Translation and Its Problems
The Catullan Meters
The Poems (1–116)