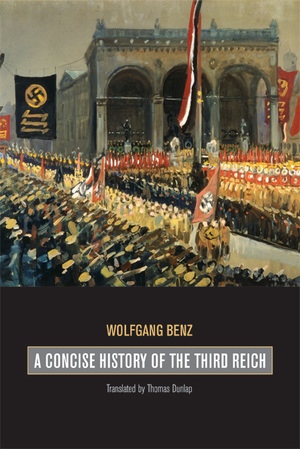 A Concise History of the Third Reich

This well-illustrated, highly accessible book at last gives general readers and students a compact, yet comprehensive and authoritative history of the twelve years of the Third Reich—from political takeover of January 30, 1933 to the German capitulation of May 1945. Originally published to rave reviews in Germany, A Concise History of the Third Reich describes the establishment of the totalitarian dictatorship, the domestic and foreign politics of the regime, everyday life and terror in National Socialist Germany, the events leading to World War II and the war itself, various forms of resistance against Hitler, and the Holocaust. The book’s extensive illustrations are thoroughly treated as documents that illuminate the visual power of Nazi ideology.

Wolfgang Benz is Professor of History and Director of the Center for Research on Antisemitism at the Technische Universität Berlin. Among his previous books is The Holocaust (1997).

“The book examines such issues as the consolidation of power, the crises and the triumph of the dictatorship, society under the Nazis, economic and social discontent with - and opposition to - the National Socialist state, and the persecution and murder of the Jews.”—Booklist

“A concise yet comprehensive survey of the state of scholarship for a general . . . audience.”—Chronique/Kroniek

Glossary
Chronology
Major Political Parties in Weimar Germany
Seats Won by the Major Parties in National Assembly (1919) and Reichstag Elections (1920–1933)
Preface to the German Edition
From the First Reich to the Third Reich: A Brief Historical Excursus
An Introduction to the English Edition by Wolfgang Benz
Prologue

1. The “National Revolution”
2. The Consolidation of Power
3. Crisis and the Triumph of Dictatorship
4. Society in the Nazi State
5. The Hitler State
6. Economic and Social Policy
7. Terror and Persecution
8. Discontent and Opposition
9. The Persecution of the Jews
10. The Road to War
11. Daily Life in Wartime Germany and the Radicalization of the Regime
12. Total War
13. The Murder of the Jews
14. Resistance
15. Collapse