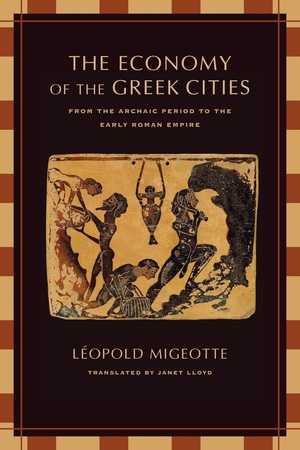 The Economy of the Greek Cities offers readers a clear and concise overview of ancient Greek economies from the archaic to the Roman period. Léopold Migeotte approaches Greek economic activities from the perspective of the ancient sources, situating them within the context of the city-state (polis). He illuminates the ways citizens intervened in the economy and considers such important sectors as agriculture, craft industries, public works, and trade. Focusing on how the private and public spheres impinged on each other, this book provides a broad understanding of the political and economic changes affecting life in the Greek city-states over a thousand-year period.

“A concise, highly competent, and traditional survey. . . . The book’s main strength lies in its clarity of structure and exposition and in its masterful control of the evidence. Readers unfamiliar with the economic world of the Greek polis will find it a reliable introduction.”—Journal Of Interdisciplinary History

“This is an excellent, concise introduction into the main branches of the economy of the Greek worlds.”—Klio

“[A] compact but impressive volume. . . . The work is firmly bedded on ancient sources, written, archaeological and numismatic, which are combined deftly to arrive at considered generalisations and balanced judgments. . . . Accessible to students new to the field of study.”—Ancient West & East

"Eschewing the anachronistic oversimplification of modernist and formalist theory, Migeotte deftly marshals primary sources in the service of nuanced description. Migeotte's accessible text restores the ancient economy—embedded, as the sources show, in a political, social, and cultural context—to its proper place in Greek civilization. A triumph of scholarly yet readable exposition!"—Nicholas F. Jones, author of Rural Athens Under the Democracy