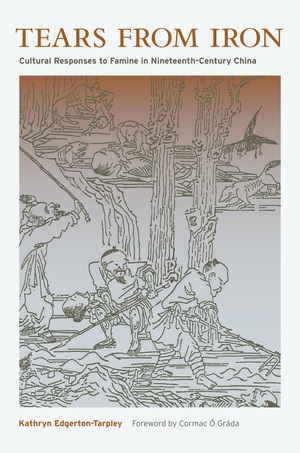 Tears from Iron Cultural Responses to Famine in Nineteenth-Century China

This multi-layered history of a horrific famine that took place in late-nineteenth-century China focuses on cultural responses to trauma. The massive drought/famine that killed at least ten million people in north China during the late 1870s remains one of China's most severe disasters and provides a vivid window through which to study the social side of a nation's tragedy. Kathryn Edgerton-Tarpley's original approach explores an array of new source materials, including songs, poems, stele inscriptions, folklore, and oral accounts of the famine from Shanxi Province, its epicenter. She juxtaposes these narratives with central government, treaty-port, and foreign debates over the meaning of the events and shows how the famine, which occurred during a period of deepening national crisis, elicited widely divergent reactions from different levels of Chinese society.

“Very inspiring and reaching well beyond the scope of the research.”—Dominique Tyl Chinese Cross Currents

"Edgerton-Tarpley's sharp, critical mind is displayed on virtually every page of this stunning-and eminently readable-book. By probing with great insight the range of cultural responses to the terrible North China famine of the late 1870s, the author makes a powerful case for the argument that events-all events-have multiple meanings."—Paul A. Cohen, author of History in Three Keys: The Boxers as Event, Experience, and Myth

part i . Setting the Scene
1. Shanxi, Greater China, and the Famine
2. Experiencing the Famine: The Hierarchy of Suffering in a Famine Song from Xiezhou

part ii . Praise and Blame: Interpretive Frameworks of Famine Causation
3. The Wrath of Heaven versus Human Greed
4. Qing Officialdom and the Politics of Famine
5. Views from the Outside: Science, Railroads, and Laissez-Faire Economics
6. Hybrid Voices: The Famine and Jiangnan Activism