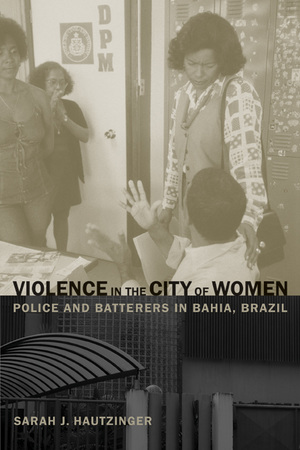 Violence in the City of Women Police and Batterers in Bahia, Brazil

Brazil's innovative all-female police stations, installed as part of the return to civilian rule in the 1980s, mark the country's first effort to police domestic violence against women. Sarah J. Hautzinger's vividly detailed, accessibly written study explores this phenomenon as a window onto the shifting relationship between violence and gendered power struggles in the city of Salvador da Bahia. Hautzinger brings together distinct voices—unexpectedly macho policewomen, the battered women they are charged with defending, indomitable Bahian women who disdain female victims, and men who grapple with changing pressures related to masculinity and honor. What emerges is a view of Brazil's policing experiment as a pioneering, and potentially radical, response to demands of the women's movement to build feminism into the state in a society fundamentally shaped by gender.

Sarah J. Hautzinger is Associate Professor and Chair of Anthropology at Colorado College.

“Makes a significant contribution to the literature on gender-based violence. It is a fascinating anthropological study . . . in rich detail. . . . Articulate and thorough investigation.”—Gender & Development

1. Womanly Webs: In-Laws and Violence
2. When Cocks Can’t Crow: Masculinity and Violence
3. Paths to a Women’s Police Station
4. Policing by and for Women
5. Reluctant Champions: Policewomen or Women Police?