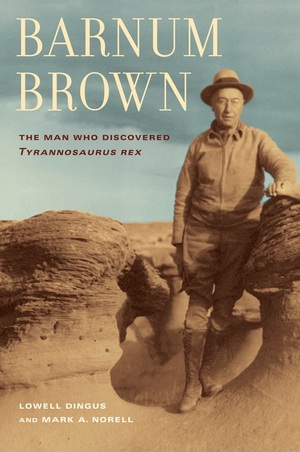 From his stunning discovery of Tyrannosaurus rex one hundred years ago to the dozens of other important new dinosaur species he found, Barnum Brown led a remarkable life (1873–1963), spending most of it searching for fossils—and sometimes oil—in every corner of the globe. One of the most famous scientists in the world during the middle of the twentieth century, Brown—who lived fast, dressed to the nines, gambled, drank, smoked, and was known as a ladies’ man—became as legendary as the dinosaurs he uncovered. Barnum Brown brushes off the loose sediment to reveal the man behind the legend. Drawing on Brown’s field correspondence and unpublished notes, and on the writings of his daughter and his two wives, it discloses for the first time details about his life and travels—from his youth on the western frontier to his spying for the U.S. government under cover of his expeditions. This absorbing biography also takes full measure of Brown’s extensive scientific accomplishments, making it the definitive account of the life and times of a singular man and a superlative fossil hunter.

“A rollicking recollection of Brown, a globe-trotting adventurer, sometime spy, and great dinosaur hunter who was the first to unearth T. Rex.”—Jen Barone Discover Magazine

“It is about time someone wrote this book . . . this book tells the story very well . . . Highly recommended.”—M. A. Wilson Choice

“Dingus and Norell do justice to the unconventional, many-faceted if somewhat mysterious Brown, aptly named after showman P.T. Barnum and to his private and public personae.”—Publishers Weekly

“An authoritative biography of Barnum Brown has long been wanting, and the authors of the new volume have done an overall excellent job of summarizing the achievements of one of the most famous fossil hunters of all time. . . . I recommend it to anyone who has visited the AMNH and wondered where so many of those specimens came from.”—Brian Switek Smithsonian.com/Dinosaur Tracking Blog

“Brown liked bonhomie, incurred woman trouble from time to time, and had a wife whose embellishments of life in the field enliven the biography. Named Lillian, she wasn’t there for Brown’s career-making discovery of T. rex in 1902, but her letter writing and published books about subsequent digs round out this biography and indicate the public interest in “Mr. Bones” during his lifetime. Dingus and Norell ably revive that in this gap-filling scientific biography.”—Gilbert Taylor Booklist

“This absorbing biography also takes full measure of Brown's extensive scientific accomplishments, making it the definitive account of the life and times of a singular man and a superlative fossil hunter.”—Science Blogs

“The definitive account of the life and times of a singular man and a superlative fossil hunter.”—The Birdbooker Report

“Occasionally, a biography strikes the perfect note . . . The authors’ use of research mixed with anecdotes makes the Brown story accessible, while also providing jumping off points for people interested in doing a little digging of their own. The exhaustive research pays off big for the reader, placing Barnum Brown in the upper ranks of well-written biographies.”—Claire Rudy Foster Foreword

“Comprehensive and enjoyable . . . A monumental amount of careful research, consultation with colleagues and source checking clearly went into this volume and it will stand forever as the definitive work on this most important character . . . Given Barnum Brown’s role in the discovery of so many dinosaurs, fossil mammals and other vertebrates—and remember that many of ‘his’ specimens are familiar ones that we have all encountered in research or on museum visits—learning more about their background, and that of the man behind their discovery and excavation, is sure to be rewarding. I highly recommend this book and congratulate the authors on a job spectacularly well done.”—Darren Naish Historical Biology

“An extremely good book, a biography that manages to paint a very human portrait, while at the same time providing a detailed analysis of the critical part Brown played in the history of American vertebrate paleontology.”—Jeffrey W. Martz Journal Vertebrate Paleontology

“Lowell Dingus and Mark Norell detail Brown’s early field work in the American West, and the years spent traveling from one continent to the next multiplying his discoveries. Even the uninitiated who cannot pronounce let alone identify many of these finds will be enthralled by a career that began before motorized traffic took over from ox wagons, and ended as computers started to encroach. . . . This is a scholarly but very readable book. Brown emerges as a character one might enjoy sitting beside on a long airplane flight.”—Jane Manaster Sacramento & San Francisco Book Revs

"Lowell Dingus and Mark Norell have produced a highly readable, comprehensive account of the life and scientific work of Barnum Brown, arguably the most intrepid and successful collector of dinosaurs and other prehistoric vertebrates ever. Their story goes beyond the sensationalism of earlier accounts to flesh out Brown as not only an intrepid explorer but an important contributor to American science."—Kevin Padian, University of California, Berkeley

"In Barnum Brown an engrossing narrative and a treasury of firsthand field notes and letters combine to form a true epic: the life of a great paleontologist and an all-too-human, and therefore fascinating, man. Indispensable reading for anyone interested in fossils and the people who hunt them."—Michael Novacek, author of Terra

“'The greatest dinosaur hunter of all time,' a fitting title for the man who shipped more than 1200 crates of fossilized bones to New York from far flung localities around the globe. In this superb, first-ever biography of Barnum Brown, Dingus and Norell paint a vivid portrait of an intrepid field worker, accomplished researcher, and popularizer of dinosaurs—a larger-than-life character who left a deep and indelible mark on the field of paleontology."—Scott D. Sampson, author of Dinosaur Odyssey: Fossil Threads in the Web of Life

"Without a doubt the most popular and well-known dinosaur in the world, Tyrannosaurus rex has inspired millions of people worldwide through fact and fiction. Similarly, just about every vertebrate palaeontologist has been affected by the amazing career of Barnum Brown. But there has never been a biography written by scientists . . . until now! Here at last is an intimate look at the man who discovered the beast and turned our imaginations loose."—Philip J. Currie, author of Encyclopedia of Dinosaurs

Contents
List of Illustrations
Prologue: The Mindset of Barnum Brown

Appendix 3.
Summary of Fossil Collections by Barnum Brown and His AMNH Crews 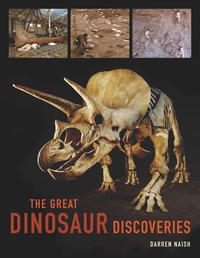 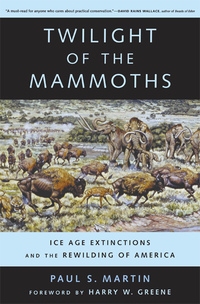