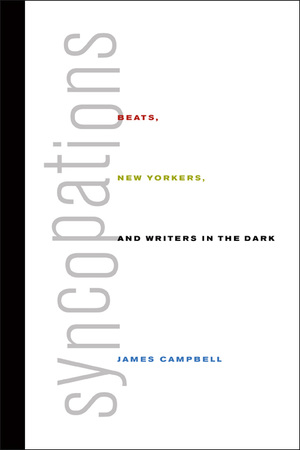 Syncopations Beats, New Yorkers, and Writers in the Dark

This compulsively readable collection of profiles and essays by James Campbell, tied together by a beguiling autobiographical thread, proffers unique observations on writers and writing in the post-1950s period. Campbell considers writers associated with the New Yorker magazine, including John Updike, William Maxwell, Truman Capote, and Jonathan Franzen. Continuing his longterm engagement with African American authors, he offers an account of his legal battle with the FBI over James Baldwin's file and a new profile of Amiri Baraka. He also focuses on the Beat poets Gary Snyder and Allen Ginsberg, as well as writers such as Edmund White and Thom Gunn. Campbell's concluding essay on his childhood in Scotland gracefully connects the book's autobiographical dots.

James Campbell writes a weekly column for the Times Literary Supplement and is the author of This Is The Beat Generation, Talking at the Gates: A Life of James Baldwin, and Exiled in Paris. He is a regular contributor to the New York Times Book Review.

“Campbell’s gift, like that of a good nineteenth-century essay writer, is that of a miniaturist rather than a caricaturist, with the result that his best pieces deftly and economically capture the essence of their subjects, measuring the particular ‘syncopations’ that distinguish their work.”—Bharat Tandon Times Literary Supplement (TLS)

“In some 21 encounters, with American writers as disparate — and frankly incompatible — as John Updike and William Maxwell at one extreme, and Amiri Baraka and Allen Ginsberg at the other, the rules of exchange are unspoken but understood. The object is neither to titillate nor to shock — though certain of Mr. Campbell's profiles do both — but to illumine. And this they accomplish splendidly.”—Eric Ormsby New York Sun

"At a time when much literary criticism remains deliberately abstruse and unduly professionalized, this book, at once anecdotal and quietly argumentative, feels like nothing so much as a fine collection of short stories about the most fascinating people you never met."—Morris Dickstein, author of A Mirror in the Roadway

"To read this book is to watch the workings of a brilliant mind—sharp, quirky, always ready to reimagine texts we thought we knew well and to shed light on others we might have passed over. Campbell fits into no theoretical camp: he is simply one of the rare critics on whom, to cite Henry James, 'nothing is lost.'"—Marjorie Perloff, author of Wittgenstein's Ladder


"Rises above the usual divisions in American literature. James Campbell is one of the most eloquent and consistently challenging writers on the British literary scene."—Caryl Phillips, author of Dancing in the Dark
Read More >

PART II THROUGH THE GRAPEVINE

9. I Heard It through the Grapevine: James Baldwin and the FBI
10. The Island Affair: Richard Wright’s Unpublished Last Novel
11. The Man Who Cried: John A. Williams
12. All That Jive: Stanley Crouch
13. Love Lost: Toni Morrison
14. The Rhetoric of Rage: AProfile of Amiri Baraka

Coda: Boswell and Mrs. Miller; A Memoir of Two Tongues