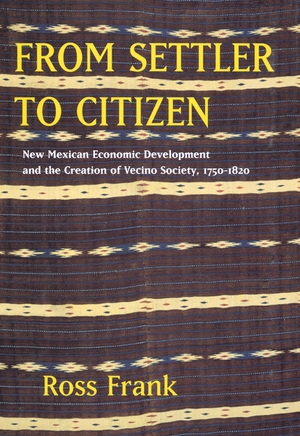 From Settler to Citizen New Mexican Economic Development and the Creation of Vecino Society, 1750-1820

The unique arts-and-crafts tradition of the American Southwest illuminates this economic and social history of colonial New Mexico, casting new light on the development of New Mexico's Hispanic community and its changing relationship with Pueblo Indians. Ross Frank's analysis of Pueblo Indian pottery, Pueblo and Spanish blankets, and Spanish religious images—or santos—links economic change to social and cultural change in this region. Using these cultural artifacts to gauge shifts in power and status, Frank charts the creation of a culturally innovative and dominating Hispanic settler—or vecino—community during the final decades of the eighteenth century.

Contrary to previous views of this period as an economic backwater, Frank shows that Spanish New Mexico instead experienced growth that tied the region closely to colonial economic reforms of the Spanish empire. The resulting economic boom dramatically altered the balance of power between the Spanish settlers and the Pueblo Indians, giving the vecinos the incentive and the means to exploit their Pueblo Indian neighbors. Frank shows that the vecinos used different strategies to take control of the Pueblo textile and pottery trade. The Hispanic community began to define its cultural identity through the economic and social subordination of the Pueblo Indians.

Connecting economic change to powerful cultural and social changes, Frank provides a new understanding of this "borderlands" region of northern New Spain in relatoin to the Spanish colonial history of Mexico. At the same time, From Settler to Citizen recovers the previously unexplored history of an important Hispanic community.

Ross Frank is Associate Professor of Ethnic Studies at the University of California, San Diego.

"Ross Frank has written a model study of New Mexico's Vecinos-a historical narrative as absorbing as it is illustrative of complex social processes."—Joyce Appleby, author of Inheriting the Revolution: The first Generation of Americans

"This is a richly dense and sophisticated history of eighteenth-century New Mexico that focuses on the economic and cultural foundations of identity. Deftly reading subtle changes in material culture and the organization of space, Frank provides historians of the Americas with a fresh perspective on the impact of the Bourbon Reforms at the margins of empire."—Ramón Gutiérrez, author of When Jesus Came, the Corn Mothers Went Away: Marriage, Sexuality, and Power in New Mexico, 1500-1846