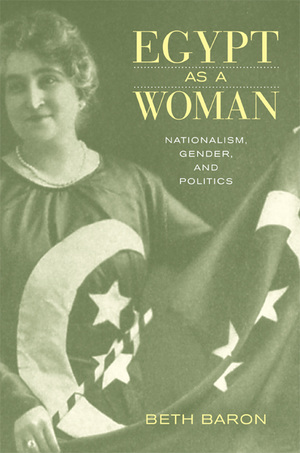 Egypt as a Woman Nationalism, Gender, and Politics

This original and historically rich book examines the influence of gender in shaping the Egyptian nation from the nineteenth century through the revolution of 1919 and into the 1940s. In Egypt as a Woman, Beth Baron divides her narrative into two strands: the first analyzes the gendered language and images of the nation, and the second considers the political activities of women nationalists. She shows that, even though women were largely excluded from participation in the state, the visual imagery of nationalism was replete with female figures. Baron juxtaposes the idealization of the family and the feminine in nationalist rhetoric with transformations in elite households and the work of women activists striving for national independence.

“Can anything new be said about modern Egyptian nationalism? Beth Baron's book Egypt as a Woman, one of the best modern Egyptian history books to appear in several years, leaves no doubt that it can. With evenhandedness and generosity, Baron shows how vital women were to mobilizing opposition to British authority and modernizing Egypt.”—Robert L. Tignor, author of Capitalism and Nationalism at the End of Empire

“A wonderful contribution to understanding Egyptian national and gender politics between the two world wars. Baron explores the paradox of women’s exclusion from political rights at the very moment when visual and metaphorical representations of Egypt as a woman were becoming widespread and real women activists—both secularist and Islamist—were participating more actively in public life than ever before.”—Donald Malcolm Reid, author of Whose Pharaohs? Archaeology, Museums, and Egyptian National Identity from Napoleon to World War I

PART 2: THE POLITICS OF WOMEN NATIONALISTS
5. The “Ladies’ Demonstrations”
6. Mother of the Egyptians
7. Partisans of the Wafd
8. An Islamic Activist