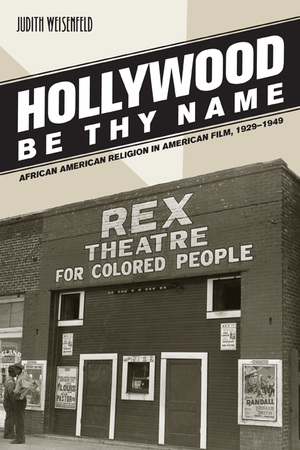 Hollywood Be Thy Name African American Religion in American Film, 1929–1949

From the earliest years of sound film in America, Hollywood studios and independent producers of "race films" for black audiences created stories featuring African American religious practices. In the first book to examine how the movies constructed images of African American religion, Judith Weisenfeld explores these cinematic representations and how they reflected and contributed to complicated discourses about race, the social and moral requirements of American citizenship, and the very nature of American identity.

Drawing on such textual sources as studio production files, censorship records, and discussions and debates about religion and film in the black press, as well as providing close readings of films, this richly illustrated and meticulously researched book brings religious studies and film history together in innovative ways.

“Judith Weisenfeld’s Hollywood Be Thy Name is a generative, well researched study of filmic representations of African Americans, black religious customs, and ideas about race in America. . . . Weisenfeld raises important questions about the medium of film, its engagement with, and shaping of, notions of race and culture in the United States. . . . An illuminating study of the history of race and film in America.”—African American Review

“The intriguing narrative will enrich undergraduate courses across fields of study in the humanities, and the volume’s sophisticated style of mapping race and religion in popular culture will challenge and rarefy graduate seminars while advancing future scholarship on the subject.”—American Historical Review

“Hollywood Be Thy Name is a highly readable book that makes a significant contribution to film studies. . . . This is a valuable contribution to the current burgeoning literature on African American film.”—American History

“Judith Weisenfeld's richly documented book uncovers an aspect of cultural images of African American religion that has been missing up to now. Readers will find a treasure trove of fresh insights and new angles even on previously researched aspects of black religion. . . . Weisenfeld has deepened and expanded our understanding of the stuff of African American religious life and blacks’ place in the American cultural imagination."—Church History: Studies In Christianity and Culture

“An interesting text of value in both film and religion course.”—Communication Booknotes Quarterly

"Weisenfeld is a professor of religion, but Hollywood Be Thy Name proves amply that she is also a first-rate cinema scholar, at home both when working as a cultural historian and when working as a textual interpreter."—Film Quarterly

"Weisenfeld's book is an extremely important contribution that adds new dimensions to the histories of religion, film, and African Americans. Previous studies have focused on sweeping assessments of African Americans in film or specific experiences of black performers or filmmakers. Weisenfeld's concentration on religion as the single most important factor in the depiction of blacks in film brings depth to our understanding of the construction of racial stereotypes and the motivations of black independent filmmakers who forged significant works despite laboring under tremendous restrictions."—Journal of American History

“The author’s magic in this volume is her ability to juggle African American history, film history, and black religiosity in a manner that is highly readable. It is indeed a major accomplishment.”—Reviews in American History

"This is a ground-breaking book. The text is remarkable in its use of MPAA files and studio archives; Weisenfeld uncovers all sorts of side stories that enrich the larger narrative. The writing is clear and concise, and Weisenfeld makes important theoretical interpretations without indulging in difficult jargon. She incorporates both film theory and race theory in graceful, non-obtrusive ways that deepen understanding. This is an outstanding work."—Colleen McDannell, author of Picturing Faith: Photography and the Great Depression
Read More >

1. “’Taint What You Was, It’s What You Is Today”: Hallelujah and the Politics of Racial Authenticity

2. “‘De Lawd’ a Natchel Man”: The Green Pastures in the American Cultural Imagination

6. “Why Didn’t They Tell Me I’m a Negro?”: Lost Boundaries and the Moral Landscape of Race