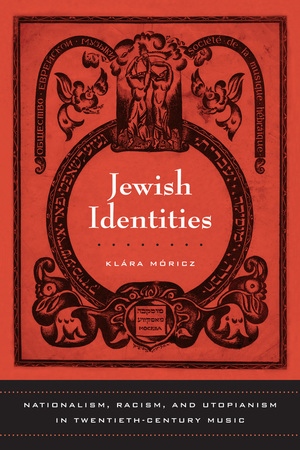 Jewish Identities mounts a formidable challenge to prevailing essentialist assumptions about "Jewish music," which maintain that ethnic groups, nations, or religious communities possess an essence that must manifest itself in art created by members of that group. Klára Móricz scrutinizes concepts of Jewish identity and reorders ideas about twentieth-century "Jewish music" in three case studies: first, Russian Jewish composers of the first two decades of the twentieth century; second, the Swiss American Ernest Bloch; and third, Arnold Schoenberg. Examining these composers in the context of emerging Jewish nationalism, widespread racial theories, and utopian tendencies in modernist art and twentieth-century politics, Móricz describes a trajectory from paradigmatic nationalist techniques, through assumptions about the unintended presence of racial essences, to an abstract notion of Judaism.

Klára Móricz is the Valentine Visiting Assistant Professor of Music at Amherst College. She is the editor of a forthcoming volume of the Béla Bartók Complete Critical Edition and a member of the editorial board of the Journal of American Musicological Society.

"This book makes a decisive and controversial contribution to the history of musical modernism. Moricz radically but thoroughly scrutinizes concepts of Jewish identity, and in doing so re-orders our understanding of 'Jewish music' as an outgrowth of nationalist, racist and utopian ideologies. The scholarship is superior in every respect. Jewish Identities is destined to become a seminal work in the reception history of European musical modernism. An absolutely outstanding and intellectually brilliant work."—Harry White, author of The Keeper's Recital: Music and Cultural History in Ireland, 1770-1970

I. JEWISH NATIONALISM À LA RUSSE: THE SOCIETY FOR JEWISH FOLK MUSIC
1. "Trifles of Jewish Music"
2. Zhidï and Yevrei in a Neonationalist Context

II. MAN'S MOST DANGEROUS MYTH: ERNEST BLOCH AND RACIAL THOUGHT
3. Racial Mystique: Anti-Semitism and Ernest Bloch's Theories of Art
4. Denied and Accepted Stereotypes: From Jézabel to Schelomo
5. The Confines of Judaism and the Elusiveness of Universality: The Sacred Service

III. UTOPIAS/DYSTOPIAS: ARNOLD SCHOENBERG'S SPIRITUAL JUDAISM
6. Uneasy Parallels: From German Nationalism to Jewish Utopia
7. Torsos and Abstractions: "Music in Its Promised Land"
8. On the Ashes of the Holocaust: Anxiety, Abstraction, and Schoenberg's Rhetoric of Fear
9. A Taste for "the Things of Heaven": Cleansing Music of Politics