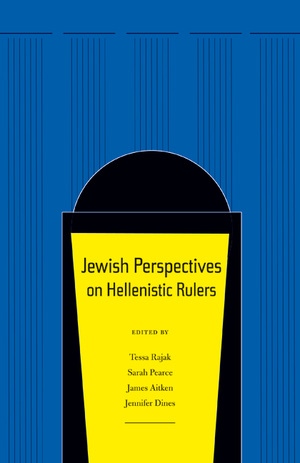 This volume gathers sixteen essays on monarchy and power in the Hellenistic period and charts a new approach to Hellenistic history by focusing attention on biblical and Jewish evidence and reading that evidence in new ways. The essays consider the kings, queens, and power figures of the Hellenistic dynasties, as well as ancient Israelite kings, the Babylonian and Persian rulers of the Bible, Parthians, and Romans. The volume also represents a new kind of interpretation of the Greek Bible (Septuagint) and of the Jewish literature of the period, setting them in the context of Hellenistic political thought and practice.

“Given that diversity, this collection of essays provides a tightly edited, accessible resource for scholars of antiquity in a wide range of disciplines.”—S. Young Choice

"The lively, serious, and informed discussions in this book provide impressive examples of the insights achieved when the Jewish evidence of the late Second Temple period is shown both to illuminate and to reflect the wider history of the Hellenistic world."—Martin Goodman, author of Rome and Jerusalem: The Clash of Ancient Civilizations

"What sets this book apart is that it bears the fruits of a truly interdisciplinary investigation into the topic. The result sheds light not just on Hellenistic kings and how they were viewed by their Jewish subjects, but also on the early Greek Bible and, more generally, the meeting of, and cross-fertilization between, Jewish and Graeco-Roman culture that occurred in the centuries following Alexander's conquest."—Guido Schepens, Katholieke Universiteit Leuven

"This wonderful collection of essays illuminates many facets of kingship in the Hellenistic world. The essays range over Hellenistic philosophy, Jewish fiction, the nuances of translation in the Greek Bible and archaeological evidence. Richly informative, and enjoyable reading besides!"—John J. Collins, author of Jewish Cult and Hellenistic Culture


"This thought-provoking book presents a series of superb studies on Jewish-Greek views of hellenistic monarchy that together are suggestive of the rich interplay between Hellenistic Jewish intellectual traditions and their deep connections to the greater world of the Hellenistic monarchies. The volume will surely stimulate much more work on the subject, and will be required reading for all those whose interests touch on the subject of Hellenistic Judaism and Hellenistic history and culture more broadly."—J.G. Manning, author of Land and Power in Hellenistic Egypt: The Structure of Land Tenure
Read More >

part one: theories and practices of hellenistic rulers

1. Philosophy and Monarchy in the Hellenistic World
Oswyn Murray

2. The Character of Ptolemaic Aristocracy: Problems of Definition and Evidence
Jane Rowlandson

5. The Image of the Oriental Monarch in the Third Book of Maccabees
Philip Alexander and Loveday Alexander

7. The Narrative Function of the King and the Library in the Letter of Aristeas
Sylvie Honigman

8. Kingship and Banditry: The Parthian Empire and Its Western Subjects
Richard Fowler

9. Translating for Ptolemy: Patriotism and Politics in the Greek Pentateuch?
Sarah Pearce

10. Poet and Critic: Royal Ideology and the Greek Translator of Proverbs
James Aitken

12. The Terminology of Government in the Septuagint—in Comparison with Hebrew, Aramaic, and Other Languages
Lester Grabbe

13. The Court Function of the Interpreter in Genesis 42.23 and Early Greek Papyri
Trevor Evans

16. Constructing Kings—from the Ptolemies to the Herodians: The Archaeological Evidence
Douglas Edwards