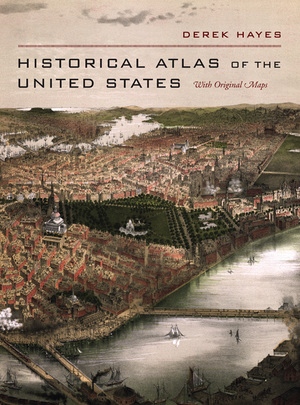 Historical Atlas of the United States With Original Maps

Using more than five hundred historical maps from collections around the world, this stunning book is the first to tell the story of America's past from a unique geographical perspective. Covering more than half a millennium in U.S. history—from conception to colonization to Hurricane Katrina—this atlas documents the discoveries and explorations, the intrigue and negotiations, the technology and the will that led the United States to become what it is today. Richly detailed, visually breathtaking maps are accompanied by extended captions that elucidate the stories and personalities behind their creation.

Coasts and mountains, rivers and lakes, and peaks and plains are described by explorers encountering them for the first time. These maps can convey explorers' ideas of what lay over the mountains ahead, their notions about what was discovered, and their explanations of the land's potential for sponsors back home. The maps can also show a promoter's attempt to sell his project to settlers or a general's assessment of a coming battle. They chart the wars that created and molded the country: the French and Indian War and the War for Independence; the Mexican and Civil Wars; the numerous Indian wars; as well as more localized battles of conquest and survival. Readers can follow the progression of map creation and design as more knowledge was gained about the American continent.

Distilling an enormous amount of information into one handsome volume, the Historical Atlas of the United States highlights the evolution of geographical knowledge at the same time that it presents a fascinating chronicle of the expansion and development of a nation.

“This fascinating collection of maps chronicles the history of America. . . . Stories and extended captions accompany the maps, shedding light on the personalities, perceptions and dreams of the maps’ creators and the evolution of our nation.”—Alaska Airlines Magazine

“ Derek Hayes's Historical Atlas of the United States (University of California Press, $39.95) is for history buffs. The maps show everything from how explorers conceived of the continent circa 1500 to the spread of the interstate highway system in the 1950s.”—Business Week

“Hayes has chosen maps that engage both viewers' intellect and their aesthetic sense. . . . A quality publication at an amazingly low price; highly recommended for all public and academic libraries, as well as map mavens everywhere.”—Library Journal

‘From the discovery and settlement of North America to the ever-evolving maps recording America’s westward push and onward to the early maps of the automobile age.”—William Grimes New York Times 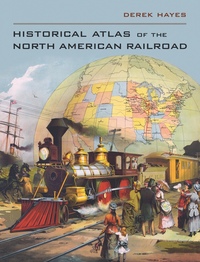