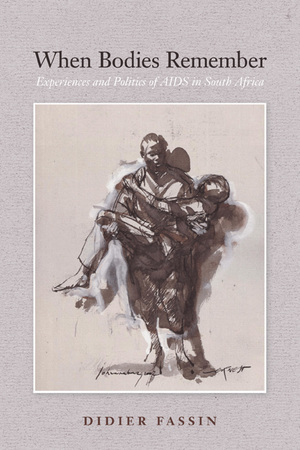 When Bodies Remember Experiences and Politics of AIDS in South Africa

In this book, France's leading medical anthropologist takes on one of the most tragic stories of the global AIDS crisis—the failure of the ANC government to stem the tide of the AIDS epidemic in South Africa. Didier Fassin traces the deep roots of the AIDS crisis to apartheid and, before that, to the colonial period.

One person in ten is infected with HIV in South Africa, and President Thabo Mbeki has initiated a global controversy by funding questionable medical research, casting doubt on the benefits of preventing mother-to-child transmission, and embracing dissidents who challenge the viral theory of AIDS. Fassin contextualizes Mbeki's position by sensitively exploring issues of race and genocide that surround this controversy. Basing his discussion on vivid ethnographical data collected in the townships of Johannesburg, he passionately demonstrates that the unprecedented epidemiological crisis in South Africa is a demographic catastrophe as well as a human tragedy, one that cannot be understood without reference to the social history of the country, in particular to institutionalized racial inequality as the fundamental principle of government during the past century.

“This ethnography is comprehensive and nuanced in its approach. . . . Fassin’s ethnography is ambitious and provocative. It is recommended to anyone interested in exploring how the past critically shapes the present characterization of AIDS in South Africa.”—Marisa Macari Journal Of Biosocial Science

"Didier Fassin makes a compelling case against behaviorist approaches that dominate AIDS research. Using a vivid mosaic of public controversies and ethnographic vignettes, Fassin works through the controversial denials of South African President Thabo Mbeki and the precautionary policies of his Health Ministers within histories of apartheid, epidemics which justified segregation, and secret biological warfare plans of Project Coast, as well as wider battles over the ethical protocols of AIDS testing and widening inequalities. Fassin writes with compassion and deep moral inquietude."—Michael M.J. Fischer, author of Emergent Forms of Life and the Anthropological Voice

"When Bodies Remember is an extraordinary exercise in counterpoint between the disquieting politics and the subjective experience of AIDS in South Africa. Didier Fassin deftly leads his readers into the 'heart of darkness' that we may comprehend this monstrous tragedy, literally unspeakable for so many, as one that touches our shared humanity. He insists that recognition of inequality rather than difference, and of embodied history rather than culture, are the keys to overcoming indifference, inciting in its place moral outrage and action. This brilliant, sensitive ethnography should be read by everyone who cares about the kind of world we live in."—Margaret Lock, author of Twice Dead: Organ Transplants and the Reinvention of Death


"A gracefully written and politically astute account of one of the world's greatest AIDS tragedies, the arrival of a full-blown AIDS epidemic in South Africa on the cusp of political victory and jubilation over the end of apartheid. The cultural and political logic of President Mbeki's refusal to accept the international public health model of the virus and his pursuit of an alternative explanation of the epidemic is given a fair and just hearing by France's leading critical medical anthropologist."—Nancy Scheper-Hughes, author of Death without Weeping

"This is a remarkable book. As Fassin dissects the deadly powers of today, he also unrelentingly looks for human alternatives to turn the AIDS tragedy around. Multi-layered and deeply moving, When Bodies Remember sets new standards for anthropological theory in the 21st century. The book's interpretive care and hope will stay with you in times to come."—João Biehl, author of Vita: Life in a Zone of Social Abandonment
Read More >

1. As If Nothing Ever Happened
The Controversy
A Life
Proposition 1: The Structures of Time

2. An Epidemic of Disputes
Beginnings
Heresy
Proposition 2: The Configuration of the Polemics

3. Anatomy of the Controversies
Ordeals
Arenas
Proposition 3: The Figures of Denial

4. The Imprint of the Past
Long Memory
Bared History
Proposition 4: The History of the Vanquished

5. The Embodiment of the World
Behind the Landscapes
Within the Narratives
Proposition 5: The Forms of Experience