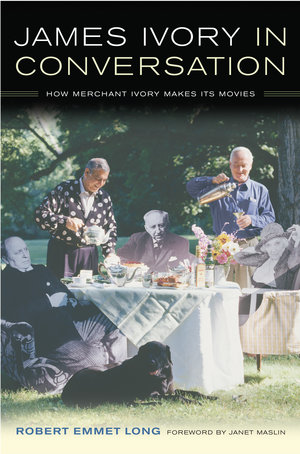 James Ivory in Conversation How Merchant Ivory Makes Its Movies

James Ivory in Conversation is an exclusive series of interviews with a director known for the international scope of his filmmaking on several continents. Three-time Academy Award nominee for best director, responsible for such film classics as A Room with a View and The Remains of the Day, Ivory speaks with remarkable candor and wit about his more than forty years as an independent filmmaker. In this deeply engaging book, he comments on the many aspects of his world-traveling career: his growing up in Oregon (he is not an Englishman, as most Europeans and many Americans think), his early involvement with documentary films that first brought attention to him, his discovery of India, his friendships with celebrated figures here and abroad, his skirmishes with the Picasso family and Thomas Jefferson scholars, his usually candid yet at times explosive relations with actors. Supported by seventy illuminating photographs selected by Ivory himself, the book offers a wealth of previously unavailable information about the director's life and the art of making movies.

On the Merchant Ivory Jhabvala partnership:

"I've always said that Merchant Ivory is a bit like the U. S. Govenment; I'm the President, Ismail is the Congress, and Ruth is the Supreme Court. Though Ismail and I disagree sometimes, Ruth acts as a referee, or she and I may gang up on him, or vice versa. The main thing is, no one ever truly interferes in the area of work of the other."


On Shooting Mr. and Mrs. Bridge:

"Who told you we had long 18 hour days? We had a regular schedule, not at all rushed, worked regular hours and had regular two-day weekends, during which the crew shopped in the excellent malls of Kansas City, Paul Newman raced cars somewhere, unknown to us and the insurance company, and I lay on a couch reading The Remains of the Day."

On Jessica Tandy as Miss Birdseye in The Bostonians:

"Jessica Tandy was seventy-two or something, and she felt she had to 'play' being an old woman, to 'act' an old woman. Unfortunately, I'couldn't say to her, 'You don't have to 'act' this, just 'be,' that will be sufficient.' You can't tell the former Blanche Du Bois that she's an old woman now."

"His was a very pleasing voice, and it was easy to follow. Why turn his books into films unless you want to do that? But I suppose my voice was there, too; it was a kind of duet, you could say, and he provided the melody."

"If you see my Indian movies then you get some idea of what it was that attracted me about India and Indians...any explanation would sound lamer than the thing warrants. The mood was so great and overwhelming that any explanation of it would seem physically thin....I put all my feeling about India into several Indian films, and if you know those films and like them, you see from these films what it was that attracted me to India."

"I was certainly not influenced by Renoir in that film. But if you put some good looking women in long white dresses in a field dotted with red poppies, andthey're holding parasols, then people will say, ‘Renoir.’"

"I came to believe that to have a powerful enemy like Pauline Kael only made me stronger. You know, like a kind of voodoo. I wonder if it worked that way in those days for any of her other victims—Woody Allen, for instance, or Stanley Kubrick."

On Andy Warhol as a dinner guest:

“I met him many times over the last twenty years of his life, but I can't say I knew him, which is what most people say, even those who were his intimates. Once he came to dinner with a group of his Factory friends at my apartment. I remember that he or someone else left a dirty plate, with chicken bones and knife and fork, in my bathroom wash basin. It seemed to be a symbolic gesture, to be a matter of style, and not just bad manners."

Robert Emmet Long has written or edited over forty books that reflect an unusual versatility, ranging from works on Henry James to James Thurber, from the films of Ingmar Bergman to the Broadway musicals of Jerome Robbins. His book The Films of Merchant Ivory (1997) is the standard work on the subject. Janet Maslin is film and book critic for the New York Times.

“A fascinating collection of chats between two people steeped in the creative processes of film-making.”—Herald and News

“This series of conversations . . . informs and engages. Ivory charmingly speaks about a career that includes credits ranging from ‘A Room with a View’ to ‘Surviving Picasso.’ He offers insight into his technique and artistic approach, selection of subject matter, choice of actors, and interactions with associates like producer Ismail Merchant and writer Ruth Prawer Jhabvala. . . . Illuminating and often humorous.”—Library Journal

"Structured as an informal chat between two friends, the book is quite readable, a solid resource for scholars of Merchant Ivory films as well as an in-depth study of Ivory's directorial sensibilities."—Publishers Weekly

"From sensitive enfant terrible to playful elder statesman, James Ivory has carried a delicate candle of pure hedonism through the violent decades, sheltering it from every hostile wind which sought to extinguish it. One of the few to whom one can unhesitatingly apply the phrase "citizen of the world," he has spent a lifetime scattering beautiful moments across the continents."—Wallace Shawn

“James Ivory is one of our greatest living directors, and these pages, deliciously poised between diplomacy and indiscretion, brim with his vast experience of every nook and cranny of the film world. Offering precious insights into how the cinematic cultures of Europe, Asia and America, of Arthouse and Hollywood, came to be blended into a ravishingly beautiful body of work, Ivory also draws for us a vivid picture of what it really feels like to put together an independent movie. But perhaps most striking is the way this book illuminates the human face of film-making, and becomes a touching testament to the deep friendships - the bonds of trust, affection, professional respect - that have made possible the unique triumph that is Merchant Ivory.”—Kazuo Ishiguro


“Robert Emmet Long’s James Ivory in Conversation transforms what might have been a routine Q & A into a lucid film history told from the unostentatious matter-of-fact viewpoint of that least narcissistic of productive and creative directors, James Ivory, with 25 films to his credit in a career that has spanned more than 40 years. He has become almost inseparably linked with producer Ismail Merchant and screenwriter Ruth Jhabvala to form the most famous collaborative troika in film history. As Mr. Ivory’s perceptively assiduous Boswell, Mr. Long deserves much of the credit for the felicitous outcome of the project. This is a must-read for all venturesome cineastes, particularly as a counterweight to all the reverse snobbery heaped upon the troika for succeeding commercially with serious and tasteful literary adaptations into film.”—Andrew Sarris
Read More >

Setting the Scene
The Early Years
Documentaries, 1952–1972
Venice: Theme and Variations
The Sword and the Flute
The Delhi Way
Adventures of a Brown Man in Search of Civilization