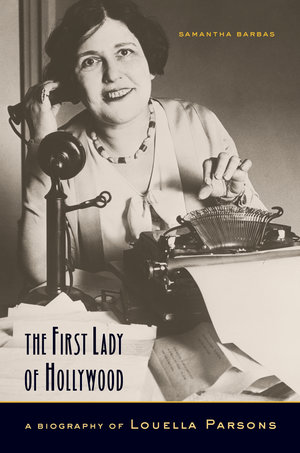 The First Lady of Hollywood A Biography of Louella Parsons

Hollywood celebrities feared her. William Randolph Hearst adored her. Between 1915 and 1960, Louella Parsons was America's premier movie gossip columnist and in her heyday commanded a following of more than forty million readers. This first full-length biography of Parsons tells the story of her reign over Hollywood during the studio era, her lifelong alliance with her employer, William Randolph Hearst, and her complex and turbulent relationships with such noted stars, directors, and studio executives as Orson Welles, Joan Crawford, Louis B. Mayer, Ronald Reagan, and Frank Sinatra—as well as her rival columnists Hedda Hopper and Walter Winchell. Loved by fans for her "just folks," small-town image, Parsons became notorious within the film industry for her involvement in the suppression of the 1941 film Citizen Kane and her use of blackmail in the service of Hearst's political and personal agendas. As she traces Parsons's life and career, Samantha Barbas situates Parsons's experiences in the broader trajectory of Hollywood history, charting the rise of the star system and the complex interactions of publicity, journalism, and movie-making. Engagingly written and thoroughly researched, The First Lady of Hollywood is both an engrossing chronicle of one of the most powerful women in American journalism and film and a penetrating analysis of celebrity culture and Hollywood power politics.

Samantha Barbas has a Ph.D. in American History from the University of California, Berkeley, and is the author of Movie Crazy: Fans, Stars, and the Cult of Celebrity (2001).

“As a co-founder of the culture of celebrity, she merits a thoughtful biography, which Barbas delivers.”—New York Times

“Barbas’s thoroughly researched and footnoted biography of the powerful gossip columnist who virtually invented celebrity journalism asks to be taken seriously as a chronicle of American history at a pivotal time—but it is also a fast and fascinating read. . . . This is a terrific book about an unusual life, and the author has done a great service by documenting it so carefully, incidentally exposing all the falsehoods Parsons related in her own 1945 autobiography, The Gay Illiterate.”—Publishers Weekly

“Barbas' book is rich in detail of all aspects of Louella's time including the cultural and the political, of the other players during the decades through which she reigned as Queen of Hollywood, and of her effect on entertainment and the industry she covered. . . . It belongs in every university library, on the shelves of cultural anthropologists, film fanatics and just folk who enjoy a juicy dish.”—Variety

“Set within the framework of evolving American popular culture, this insightful first biography of legendary Hollywood columnist Louella Parsons is also a fascinating look at the world of movies, newspapers, politics, publicity, and ever-changing social roles. . . . The in-depth description of the power that Parsons wielded within the industry is especially illuminating, as is the chronicle of intense rivalries with other columnists-most notably, Hedda Hopper. Solid details of Parsons's life aid in presenting a three-dimensional portrait of both the woman and the public figure. This well-researched and finely written work will appeal to a wide readership.”—Library Journal

“Fascinating. . . . This is a model of biographical writing.”—CHOICE

“An important work for those interested in the history of American celebrity culture, gender, Hollywood, or journalism, or for anyone who enjoys a fascinating read.”—H-Net Reviews

"This significant book is the first full length biography of one of the most influential women in Hollywood. It spans a momentous time in terms of the film industry and, with superior scholarship, examines that era through a different and important lens."—Cari Beauchamp, author of Without Lying Down

"This book makes an important contribution to the study of the relationships among journalism, publicity, and celebrity, skillfully connecting issues that have impact on Parson's life and career and thoroughly documenting her rise to extraordinary power. The research is extensive and fills in details that will interest even those who know parts of the story well."—Charles Affron, author of Lillian Gish: Her Legend, Her Life

"More than just an addictively engrossing study of the infamous gossip columnist, Barbas' The First Lady of Hollywood: A Biography of Louella Parsons, is a deftly written historical, political and cultural chronicle of the United States during the first half of the 20th century."—Susan King, Los Angeles Times

"Who speaks for Louella Parsons? Now nearly forgotten, she was once the most powerful woman in Hollywood, the vehicle through which the stars spoke to the world. Samantha Barbas' enviably thorough and readable biography restores Parsons' voice and her position in the movie firmament. It's about time."—Kenneth Turan, columnist for the Los Angeles Times