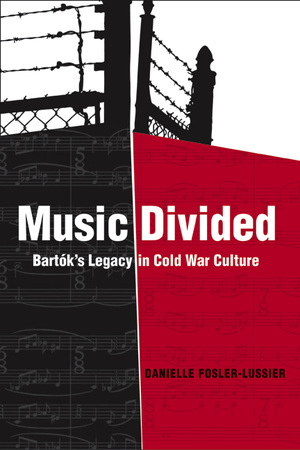 Music Divided explores how political pressures affected musical life on both sides of the iron curtain during the early years of the cold war. In this groundbreaking study, Danielle Fosler-Lussier illuminates the pervasive political anxieties of the day through particular attention to artistic, music-theoretical, and propagandistic responses to the music of Hungary’s most renowned twentieth-century composer, Béla Bartók. She shows how a tense period of political transition plagued Bartók’s music and imperiled those who took a stand on its aesthetic value in the emerging socialist state. Her fascinating investigation of Bartók’s reception outside of Hungary demonstrates that Western composers, too, formulated their ideas about musical style under the influence of ever-escalating cold war tensions.

Music Divided surveys Bartók’s role in provoking negative reactions to “accessible” music from Pierre Boulez, Hermann Scherchen, and Theodor Adorno. It considers Bartók’s influence on the youthful compositions and thinking of Bruno Maderna and Karlheinz Stockhausen, and it outlines Bartók’s legacy in the music of the Hungarian composers András Mihály, Ferenc Szabó, and Endre Szervánszky. These details reveal the impact of local and international politics on the selection of music for concert and radio programs, on composers’ choices about musical style, on government radio propaganda about music, on the development of socialist realism, and on the use of modernism as an instrument of political action.

Danielle Fosler-Lussier is Assistant Professor of Music at The Ohio State University.

“Fosler-Lussier presents here a nuanced analysis of broader debates about musical modernism, and demonstrates with great clarity relationships between aesthetic questions and broader political and social issues . . . . She reveals deeper similarities in the behavior of musicians and listeners apparently separated by the Cold War divide.”—European History Qtly

“Music Divided is a lucid, sophisticated, and highly engaging book, one that will appeal equally to musicians, cultural historians, and social philosophers.”—Mark Carroll Slavic Review

"This is an extremely important, groundbreaking study. The research is impressive and explores a wide variety of resources that span several languages, disciplines, and secondary as well as archival sources. Stylistically uncomplicated and lucidly written, this book is a fascinating piece of reading."—László Somfai, author of Béla Bartók: Composition, Concepts, and Autograph Sources, Editor-in Chief of the Béla Bartók Complete Critical Edition

1. Bartók’s Concerto for Orchestra and the Demise of Hungary’s “Third Road”
2. A Compromised Composer: Bartók’s Music and Western Europe’s Fresh Start
3. “Bartók Is Ours”: The Voice of America and Hungarian Control over Bartók’s Legacy
4. Bartók and His Publics: Defining the “Modern Classic”
5. Beyond the Folk Song; or, What Was Hungarian Socialist Realist Music?
6. The “Bartók Question” and the Politics of Dissent: The Case of András Mihály