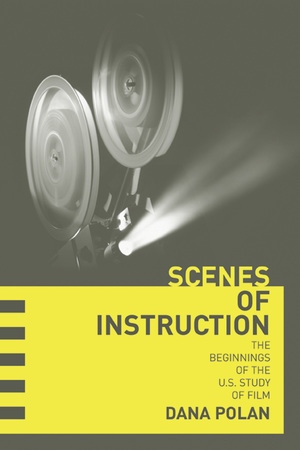 Scenes of Instruction The Beginnings of the U.S. Study of Film

This engaging book chronicles the first classes on the art and industry of cinema and the colorful pioneers who taught, wrote, and advocated on behalf of the new art form. Using extensive archival research, Dana Polan looks at, for example, Columbia University’s early classes on Photoplay Composition; lectures at the New School for Social Research by famed movie historian Terry Ramsaye; the film industry’s sponsorship of a business course on film at Harvard; and attempts by the Academy of Motion Picture Arts and Sciences to create programs of professionalized education at the University of Southern California, Stanford, and elsewhere. Polan examines a wide range of thinkers who engaged with the new art of film, from Marxist Harry Alan Potamkin to sociologist Frederic Thrasher to Great Books advocates Mortimer Adler and Mark Van Doren.

Dana Polan is Professor of Cinema Studies at the Tisch School of the Arts, New York University. Among his books are Jane Campion, Pulp Fiction, In a Lonely Place, and the forthcoming titles The Sopranos and The French Chef.

“Polan’s salient book is unique, innovative, rigorous and therefore essential in various fields such as the history of education, American studies, and film studies. . . . The most important book in film studies published so far in the United States during this decade.”—Journal Of The American Stds Assoc Of Texas

"Polan's book offers the first pedagogical history of the emergence of film studies courses within the American university system prior to World War II, based on an amazing wealth of little known or even unknown material. It also offers an equally valuable intellectual history in which early film studies courses clarify the theoretical frameworks governing the humanities and social sciences in higher education. And the writing is sophisticated yet accessible and engaging."—Richard Abel, author of Americanizing the Movies and "Movie-Mad" Audiences, 1910-1914

Acknowledgments
Introduction: Toward a Disciplinary History of Film Studies

1. First Forays in Film Education: The Pedagogy of Photoplay Composition at Columbia University
2. A Brief Interlude as the Movies March On: Terry Ramsaye and the New School for Social Research
3. “Younger Art, Old College, Happy Union”: Harvard Goes into the Business and Art of the Movies
4. Between Academia and the Academy of Motion Picture Arts and Sciences: The University of Southern California Ventures into the Cinema
5. Politics as Pedagogy, Pedagogy as Politics: The Rather Brief Moment in Time of Harry Alan Potamkin
6. Appreciations of Cinema: Syracuse Discovers Film Art
7. Cinematic Diversions in Sociology: Frederic Thrasher in the World of Film Appreciation
8. Middlebrow Translations of Highbrow Philosophy: The Film Fandom of the 1930s Great Books Intellectuals