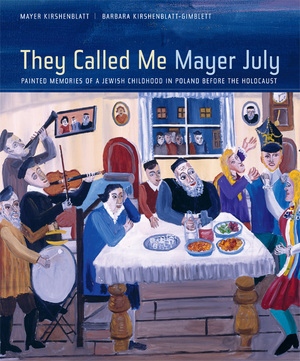 Intimate, humorous, and refreshingly candid, this extraordinary work is a remarkable record—in both words and images—of Jewish life in a Polish town before World War II as seen through the eyes of an inquisitive boy. Mayer Kirshenblatt, who was born in 1916 and left Poland for Canada in 1934, taught himself to paint at age 73. Since then, he has made it his mission to remember the world of his childhood in living color, "lest future generations know more about how Jews died than how they lived." This volume presents his lively paintings woven together with a marvelous narrative created from interviews that took place over forty years between Mayer and his daughter, Barbara Kirshenblatt-Gimblett. Together, father and daughter draw readers into a lost world—we roam the streets and courtyards of the town of Apt, witness details of daily life, and meet those who lived and worked there: the pregnant hunchback, who stood under the wedding canopy just hours before giving birth; the khayder teacher caught in bed with the drummer's wife; the cobbler's son, who was dressed in white pajamas all his life to fool the angel of death; the corpse that was shaved; and the couple who held a "black wedding" in the cemetery during a cholera epidemic. This moving collaboration—a unique blend of memoir, oral history, and artistic interpretation—is at once a labor of love, a tribute to a distinctive imagination, and a brilliant portrait of life in one Jewish home town.

Mayer Kirshenblatt is an artist living and working in Toronto. His work has been exhibited in solo and group exhibitions at The Jewish Museum in New York, Koffler Gallery, and Canadian National Exhibition, as well as in an exhibition organized by the Smithsonian Institution. Barbara Kirshenblatt-Gimblett is University Professor and Professor of Performance Studies at New York University. She is the author of Destination Culture: Tourism, Museums, and Heritage (UC Press) and Image Before My Eyes: A Photographic History of Jewish Life in Poland Before the Holocaust (with Lucjan Dobroszycki) and coeditor of Art from Start to Finish and The Art of Being Jewish in Modern Times.

“Brimming with rich narrative detail that adds context to the paintings. . . . This unique project is a blend of memoir, oral history, and visual interpretation.”—Artdaily.org

“In Mayer Kirshenblatt’s collective autobiography, . . . we see that Jewish memory is stored and transmitted through art, through the creative expression of painting. When Kirshenblatt paints Jewish rituals and Jewish life, whether in their joy or their sadness, he preserves both his own memories and also the collective memories of the Polish Jewish community.”—Religion & Ethics Nwswkly

“A remarkable and necessary book on a number of fronts.”—Canadian Jewish News

“Kirshenblatt’s manifold talents are showcased in a handsome, lavishly illustrated volume . . . in which he and his daughter, Barbara Kirshenblatt-Gimblett, resurrect Jewish Poland through nostalgic text and paintings. Thanks to this father-and-daughter team, a reader is inexorably drawn into a universe that was obliterated by the Nazis and only really exists in the minds of survivors such as Kirshenblatt.”—Canadian Jewish News

“Scene by scene, street by street, family by family, the paintings nearly come to life on the museum's walls, creating something like a home movie of a vanished world. . . . His recalled details are precise, colorful and emotional. . . .Kirshenblatt's written recollections, posted with many of the paintings, add to the richness and poignancy of the exhibit.”—Contra Costa Times

"You know that feeling when you crack open a book, begin reading and almost immediately realize you're holding a masterpiece in your hands? I had that rare, wonderful experience when I started reading Mayer Kirshenblatt and Barbara Kirshenblatt-Gimblett's They Called Me Mayer July: Painted Memories of a Jewish Childhood in Poland before the Holocaust. I won't say anything about it other than: buy it now and pass it on to others. It's a beautiful thing. "—Dave Isay, Nprstorycorps- listen Closely

“Though ‘primitive’ by the classical standards of painting, Mayer Kirshenblatt has left us a visual memorial book of greater value for our heritage than the masterpieces in a museum."—Forverts

“Kirshenblatt’s canvasses, together with a stunningly vivid text . . . have now been issued in a handsome volume by the University of California Press, and the result is a marvel. . . . The book — the product at once of scholarly rigor and a boy’s sense of wonder, respect for the dead and an even greater respect for the living, ethnographic exactitude and artistic style, a yearning born of loss and a synthesis born of collaboration — is a book like no other.”—Forward

“A joyful book . . . filled with a vitality and sense of wonderment.”—History In Review

“In the Bible, Noah collects for his ark two of each species to preserve from annihilation in the Flood. In this glorious ark of a book, Mayer Kirshenblatt has accomplished a project of no less epic proportions: He has rescued from oblivion stories of his town of Apt as it lived and breathed before the war.”—Los Angeles Times Book Review

“Sweet, coarse, and at times devastating.”—Nextbook

“This collection of pre-Holocaust memories will be a lasting contribution to our understanding of Eastern European Jewish life and culture before its destruction.”—Publishers Weekly

“Memories of his early years are very vivid, full of colorful characters, places and events. There is an old saying that a picture is worth a thousand words and Mr. Kirshenblatt uses his skill in painting to tell the story of a way of life that has all but disappeared.”—The Jewish Press

“It is best through personal stories that we can grasp the world of our fathers which the Nazis had destroyed. Mayer Kirshenblatt has a unique gift for evocation of the past in his simple and beautiful paintings. Each one tells a story. Together they make up a world.”—Jan T. Gross, author of Neighbors: The Destruction of the Jewish Community in Jedwabne, Poland

“Mayer Kirshenblatt brings to life the small Polish town of Apt prior to 1934. We see before our eyes the world of Polish Jewry, from the well-dressed kleptomaniac who steals live fish to Kirshenblatt's mother in her kitchen. His paintings are simple, direct, often witty, and always moving. A book to buy, a book to share.”—Sander L. Gilman, author of Multiculturalism and the Jews

“As if memory itself had come and lifted up his brush, Mayer Kirshenblatt evokes every aspect of his childhood in a tender, beautiful series of paintings. The accompanying narrative mirrors the qualities of his art: a remarkable spontaneity and transparency permits the precious illusion that Apt, Poland, lives again in scenes of birth and death, recreations of kitchens and fire stations and farms, inhabited by a full and lively cast of butchers, milkmaids, prostitutes, musicians, all so lovingly and creatively brought to life. It is a magician's trick, a joyous and deeply satisfying immersion in the lost world of prewar Poland Jewry."—Ann Kirschner, author of Sala’s Gift: My Mother’s Holocaust Story

Storehouse of Memories
1. My Town
From the Ancient City Gate
Along the River
The Jewish Street
Opatów
Competition Was Keen
Getting Around
2. My Family
Dominoes, Cheesecake, and Cigarettes
A Turkey as Big as a Calf
Rivke the Cossack
The Soup Pot Never Left the Stove
The Courtyard
Going Bankrupt
3. My Youth
Robbed of My Youth
Teasing Snails from Their Shells
A Place to Belong
No Future in Apt
4. My Future
A Cold and Stormy Crossing
A Heavy Heart