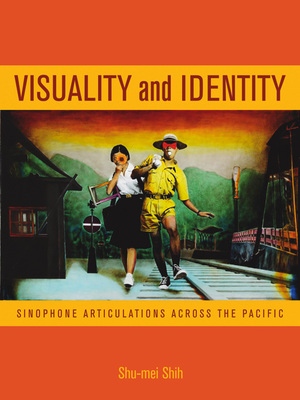 Visuality and Identity Sinophone Articulations across the Pacific

Shu-mei Shih inaugurates the field of Sinophone studies in this vanguard excursion into sophisticated cultural criticism situated at the intersections of Chinese studies, Asian American studies, diaspora studies, and transnational studies. Arguing that the visual has become the primary means of mediating identities under global capitalism, Shih examines the production and circulation of images across what she terms the "Sinophone Pacific," which comprises Sinitic-language speaking communities such as the People's Republic of China, Taiwan, Hong Kong, and Chinese America. This groundbreaking work argues that the dispersal of the so-called Chinese peoples across the world needs to be reconceptualized in terms of vibrant or vanishing communities of Sinitic-language cultures rather than of ethnicity and nationality.

Shu-mei Shih is Professor in Asian Languages and Cultures, Comparative Literature, and Asian American Studies at the University of California, Los Angeles. She is the author of The Lure of the Modern: Writing Modernism in Semicolonial China, 1917-1937 (UC Press) and coeditor of Minor Transnationalism.

“Shih’s book is insightful and thought provoking. It is important to the field of media and identity studies.”—Yi Zheng Chinese Historical Review

"The reader may be startled by the juxtaposition of visual and phonic in the title of this stimulating volume. Shih does it with a purpose. The Sinophone refers more to a people than a voice, as the basis for affinity across global spaces, that confers a commonality upon them even as they follow diverse historical trajectories. The visual confirms this commonality, even as it opens up those same people to forces of cultural globalization, forces that themselves both unite and divide. The deconstruction of categories such as China or Chineseness always seems to invite their reconstruction on new bases. Shih offers a novel and illuminating account of this double motion in the contemporary production of a 'global Chinese' (Sinophone) culture through visual media. An important addition to cultural and diasporic studies in the China field."—Arif Dirlik, author of Global Modernity: Modernity in the Age of Global Capitalism

"Against the backdrop of what she calls the Sinophone Pacific—that representational time-space traversed by polyphonic articulations of de-standardized Chineseness as well as by myriad visual mediations— Shu-mei Shih offers an admirably global vision for minoritized culture production. Her analysis of gender, class, language, and cultural politics is as trenchant as her challenge to China-centrism is timely. A remarkable critical accomplishment."—Rey Chow, Andrew W. Mellon Professor of the Humanities, Brown University


“Tracing the spectral production of 'Chinese' identity as it is disseminated globally, Shih boldly moves away from using place (ethnicity) and the body (race) to anchor Chinese identity, to argue that the visual (film) and the verbal (language and linguistics) are the most salient ones in the modern and contemporary historical formation. She succeeds brilliantly.”—David Palumbo-Liu, author of Asian/American: Historical Crossings of a Racial Frontier
Read More >

4. The Incredible Heaviness of Ambiguity
A Short History of the "Mainland"
"Eternal China" in the 1990s
The "Intimate Enemy" in the Twenty-First Century
Struggles of the Sinophone

Conclusion: The Time and Place of the Simophone
Notes
Selected Bibliography
Index