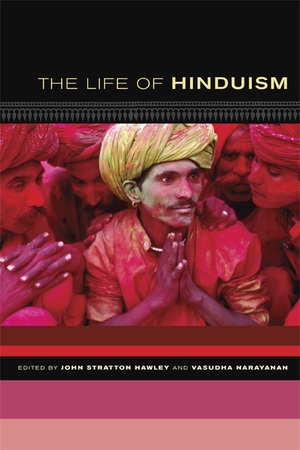 The Life of Hinduism brings together a series of essays—many recognized as classics in the field—that present Hinduism as a vibrant, truly “lived” religion. Celebrating the diversity for which Hinduism is known, this volume begins its journey in the “new India” of Bangalore, India’s Silicon Valley, where global connections and local traditions rub shoulders daily. Readers are then offered a glimpse into the multifaceted world of Hindu worship, life-cycle rites, festivals, performances, gurus, and castes. The book’s final sections deal with the Hinduism that is emerging in diasporic North America and with issues of identity that face Hindus in India and around the world: militancy versus tolerance and the struggle between owning one’s own religion and sharing it with others.

John Stratton Hawley is Ann Whitney Olin Professor of Religion at Barnard College. He is the editor of Saints and Virtues and Devi: Goddesses of India (both from UC Press), among other books. Vasudha Narayanan is Professor of Religion at University of Florida. Her books include The Tamil Veda: Pillan's Interpretation of the Tiruvaymoli and The Vernacular Veda: Revelation, Recitation, and Ritual.

"Hawley and Narayanan have shaped the presentation of this volume in an elegant, graceful way; the framework is brilliant, original, and compelling. These articles are very accessible, informative, diverse, and complex in argumentation. The collection of readings, carefully sifted from the repertoire of books and articles over the past generation, brings together items that are factually accurate and just great reads in their own right."—Paul B. Courtright, co-editor, From the Margins of Hindu Marriage: Essays in Gender, Religion, and Culture

PART I WORSHIP
1 The Experience: Approaching God
2 The Deity: The Image of God
3 The Miraculous: The Birth of a Shrine

PART III FESTIVAL
6 Divali: The Festival of Lights
7 Holi: The Feast of Love

PART IV PERFORMANCE
8 An Open-Air Ramayana: Ramlila, the Audience Experience
9 A Ramayana on Air: “All in the (Raghu) Family,” A Video Epic in Cultural Context
10 Possession by Durga: The Mother Who Possesses

PART VIII IDENTITY
17 Militant Hinduism: Ayodhya and the Momentum of Hindu Nationalism
18 Tolerant Hinduism: Shared Ritual Spaces—Hindus and Muslims at the Shrine of Shahul Hamid
19 Hinduism for Hindus: Taking Back Hindu Studies
20 Hinduism with Others: Interlogue