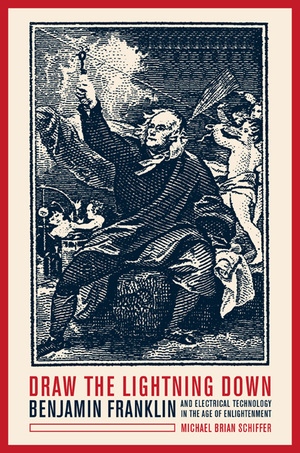 Most of us know—at least we've heard—that Benjamin Franklin conducted some kind of electrical experiment with a kite. What few of us realize—and what this book makes powerfully clear—is that Franklin played a major role in laying the foundations of modern electrical science and technology. This fast-paced book, rich with historical details and anecdotes, brings to life Franklin, the large international network of scientists and inventors in which he played a key role, and their amazing inventions. We learn what these early electrical devices—from lights and motors to musical and medical instruments—looked like, how they worked, and what their utilitarian and symbolic meanings were for those who invented and used them. Against the fascinating panorama of life in the eighteenth century, Michael Brian Schiffer tells the story of the very beginnings of our modern electrical world.

The earliest electrical technologies were conceived in the laboratory apparatus of physicists; because of their surprising and diverse effects, however, these technologies rapidly made their way into many other communities and activities. Schiffer conducts us from community to community, showing how these technologies worked as they were put to use in public lectures, revolutionary experiments in chemistry and biology, and medical therapy. This story brings to light the arcane and long-forgotten inventions that made way for many modern technologies—including lightning rods (Franklin's invention), cardiac stimulation, xerography, and the internal combustion engine—and richly conveys the complex relationships among science, technology, and culture.

Michael Brian Schiffer is Professor of Anthropology at the University of Arizona. His many books include The Material Life of Human Beings (1999), Taking Charge: The Electric Automobile in America (1994), Technological Perspectives on Behavioral Change (1992), and The Portable Radio in American Life (1991).

"Draw the Lightning Down offers the reader a novel, and downright refreshing, viewpoint on the science and technology that were most central in bringing about the Enlightenment. . . . [It] presents the reader with a wonderfully researched and delightful voyage into the past. This one is well worth taking."—Shawn Carlson American Behavioral Scientist

“A strong book, imaginatively conceived, based on the sources, and informed by theory. It should be read, appreciated, and argued about.”—Darwin Stapleton American Historical Review

"Schiffer writes about science in a way non-scientists can enjoy, and in so doing opens our minds to the fantastic developments in electrical technology that blossomed in the eighteenth century. . . . This is the kind of book you'll tell your friends about."—Dan Danbom Time Out For Entertainment

"Many historians have discussed early electrical instruments, but this is the most comprehensive account of the enormous variety of devices developed during this period. With the help of numerous illustrations, Schiffer clearly explains how they worked and what they were for."—Patricia Fara Times Literary Supplement (TLS)

"In focusing an archeologist's eye on electrical technology in the eighteenth century, Michael Brian Schiffer brings fresh and valuable insight to the study of the process of technological diffusion. At the same time he provides a lively account of how an interest in electricity spread across a surprisingly broad range of Enlightenment society."—Bernard Finn, Curator, Electrical Collections, Smithsonian Institution


"Michael Brian Schiffer brings his love of technology and archaeology together into a great story of the Age of Enlightenment. A wonderful read for those who want to dive into compelling stories of artifacts, people and scientific thought. Draw the Lightning Down pushes archaeology into times and technology where it has not gone before. This is an absorbing and literally electrifying book!"—Pamela J. Cressey, City Archaeologist, Alexandria Archaeology
Read More >

1. The Franklin Phenomenon
2. In the Beginning
3. A Coming of Age
4. Going Public
5. Power to the People
6. Life and Death
7. First, Do No Harm
8. An Electrical World
9. Property Protectors
10. A New Alchemy
11. Visionary Inventors
12. Technology Transfer: A Behavioral Framework