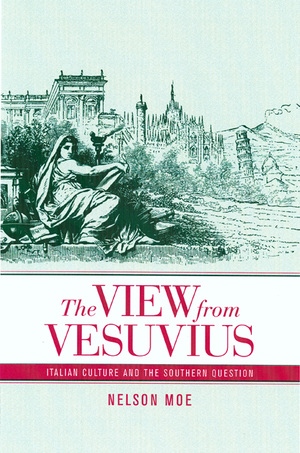 The View from Vesuvius Italian Culture and the Southern Question

In the years around 1825, two Italian writers working independently of one another took up the question of Italy's character as a "southern" country. Each was responding in some way to what foreigners had written about Italy, but their views were dramatically opposed. The economist Melchiorre Gioia argued that the categories of northern and southern said little about the character of a people. Whether to the north or the south of the Alps, the laws governing human society are essentially the same. The poet and essayist Giacomo Leopardi, on the other hand, asserted that Italy's southern nature provided the key to its supremacy in the past and its decadence in the present. "It would seem that the north's time has come," he writes (Discorso 83). Establishing an equation between modernity and the north, Leopardi assigned Italy the status of southern has-been.

Between the mid-eighteenth and mid-nineteenth centuries, north and south became charged moral categories in the cultural imagination of Europe. In the work of philosophers and poets, historians and novelists, the idea that Europe was divided between northern and southern peoples and countries acquired a new evocative power and explanatory force. For many, Italy was the southern country par excellence. The lands and peoples of Italy were central to the elaboration of the idea of the south, while the south played an important role in the representation of Italy and Italianness. I begin my study by situating the image of the south within this broader geopolitical and conceptual framework, examining the representation of Italy as Europe's south in a set of texts written both by Italians and foreigners in the century before unification. This expanded perspective will enable us in subsequent chapters to highlight that which is specific to representations of the Italian Mezzogiorno as well as to appreciate the overarching geographical division of which it forms a part. In my readings of texts ranging from Montesquieu's Spirit of the Laws to Giacomo Leopardi's Discourse on the Current Customs of Italians, I shall pay special attention to Italy's place in the cultural construction of modern Europe and to Europe's place in the cultural construction of modern Italy. For it is precisely the question of Italy's relation to, and its difference from, western European civilization that will play a decisive role in accentuating visions of southern difference from the mid-nineteenth century on.

The discursive construction of Italian identity in the century before unification was deeply enmeshed in the geopolitical and cultural context of Europe. To be sure, every national identity has taken shape in a comparative frame of reference and through cultural exchange with foreigners. But in the Italian case, these international aspects of national identity formation were especially pronounced owing to the particular history of the relations between Italy and western Europe in the modern era. Over the course of the seventeenth century, a radical inversion in the relations of force and cultural prestige between Italy and western Europe took place. Model to and "master" of Europe since the fourteenth century (Le Goff, 2,074), during the 1600s, Italy was dramatically upstaged by countries to the north and west of the Alps: Holland, England, and France.1 What was taking place in fact was a massive shift of geopolitical and economic power away from the Mediterranean world as a whole.2 As Fernand Braudel writes, from the mid-1600s on "the Mediterranean lay firmly outside the mainstream of history which it had almost exclusively dominated for centuries on end" (Perspective 79). Henceforth the north would dominate the south, within Europe and across the globe.3

Italy marked this epochal shift in a special way. The Italians had lorded their economic power and cultural supremacy over the rest of Europe since the fourteenth century. Italian intellectuals referred to those beyond the Alps as barbarians, using a conceit dating back to the days of Petrarch and central to the consciousness of Italian elites right through the Risorgimento.4 Now the tables were turning. Italian civilization was certainly not eclipsed overnight; in the visual arts and music, for example, Italy remained preeminent even as its political influence and economic power declined.5 But by the end of the 1600s a new vision of western Europe's superiority vis-à-vis Italy had clearly emerged.6 As Franco Venturi notes in his classic study of foreign views of Italy in the modern era, over the course of the late seventeenth and early eighteenth centuries, western European charges of Italian "decadence, corruption, weakness, political and moral passivity" became "ever more frequent and severe" ("Italia" 999). English politicians, men of letters, and travelers increasingly insisted upon the "extreme misery and poverty that are in most of the Italian states" ("Italia" 1,012). Montesquieu, writing of Italy's "entirely deserted and depopulated" towns in the late 1720s, reflected, "it seems that their only reason for existence is to mark the spot where those great cities once stood of which history has spoken so profusely" ("Italia" 1,026). Fifteen years later an En

The vexed relationship between the two parts of Italy, often referred to as the Southern Question, has shaped that nation's political, social, and cultural life throughout the twentieth century. But how did southern Italy become "the south," a place and people seen as different from and inferior to the rest of the nation? Writing at the rich juncture of literature, history, and cultural theory, Nelson Moe explores how Italy's Mezzogiorno became both backward and picturesque, an alternately troubling and fascinating borderland between Europe and its others. This finely crafted book shows that the Southern Question is far from just an Italian issue, for its origins are deeply connected to the formation of European cultural identity between the mid-eighteenth and late nineteenth centuries.

Moe examines an exciting range of unfamiliar texts and visual representations including travel writing, political discourse, literary texts, and etchings to illuminate the imaginative geography that shaped the divide between north and south. His narrative moves from a broad examination of the representation of the south in European culture to close readings of the literary works of Leopardi and Giovanni Verga. This groundbreaking investigation into the origins of the modern vision of the Mezzogiorno is made all the more urgent by the emergence of separatism in Italy in the 1990s.

“Of interest to anyone studying the formation of modern states and national identities.”—John Davis American Historical Review

“This book is a major contribution to the history of the image of the Italian South from ca. 1750 to 1885 but has broader implications . . . [It] is a well-written and challenging book.”—Mediterranean Historical Review

"This may well be the most complete and fascinating historical investigation of the myths and stereotypes through which European elites have observed and judged the south of Italy in the modern era."—Piero Bevilacqua, University of Rome

"A tour de force exploration of how the idea of the south of Italy – the Southern question – developed in the eighteenth and nineteenth centuries in Europe and Italy. Nelson Moe’s book is a provocative reassessment of an old question, newly conceived and dictated by larger ideological and political needs that extend far beyond the geographic borders of the Italian nation."—Judge, Scaglione Publication Award , Italian Literary Series