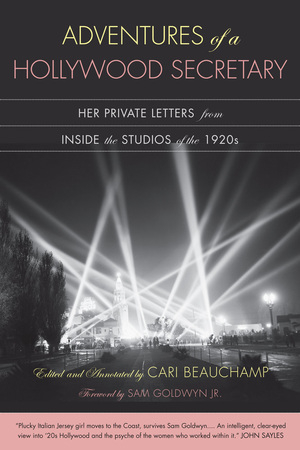 Adventures of a Hollywood Secretary is an insider’s view of the film studios of the 1920s—and the first from a secretary’s perspective. Rich in gossip, it is also an eyewitness report of Hollywood in transition. In the summer of 1924, Valeria Belletti and her friend Irma visited California, but instead of returning home to New York, the twenty-six-year-old Valeria decided to stay in Los Angeles. She moved into the YWCA, landed a job as Samuel Goldwyn's personal and social secretary and proceeded to trip over history in the making. As she recounts in her dozens of letters to Irma, Valeria Belletti encountered every type of Hollywood player in the course of her working day: moguls, directors, stars, writers, and hopeful extras. She shares news about Valentino's affairs, Sam Goldwyn's bootlegger, the development of the “talkies,” her own role in helping to cast Gary Cooper in his first major part and much more—often in hilarious detail. She writes of her living and working conditions, her active social life, and her hopes for the future—all the everyday concerns of a young working woman during the jazz age. Alternating sophistication with naiveté, Valeria’s letters intimately document a personal journey while giving us a unique portrait of a fascinating era.

Valeria Belletti was born in New Jersey on October 11, 1898, the only child of Italian immigrants. Before working for Samuel Goldwyn and Cecil B. DeMille in the mid-1920s, she was secretary to founder of the Theater Guild, Lawrence Langner, in Manhattan. Cari Beauchamp is the author of Without Lying Down: Frances Marion and the Powerful Women of Early Hollywood (UC Press, 1998), editor and annotator of Anita Loos Rediscovered: Film Treatments and Fiction by Anita Loos, Creator of “Gentlemen Prefer Blondes” (UC Press, 2003) and Adventures of a Hollywood Secretary: Her Private Letters from Inside the Studios of the 1920s (UC Press ) She also wrote  Joseph P. Kennedy Presents: His Hollywood Years; My First Time in Hollywood: Stories from the Pioneers, Dreamers and Misfits who made the Movies, and is coauthor of Hollywood on the Riviera (1992). Her documentary films have been nominated for an Emmy and a Writers Guild Award and she is the only person to twice be named an Academy of Motion Picture Arts and Sciences Scholar.   She is also a contributor to Vanity Fair, serves as the resident scholar for the Mary Pickford Foundation and lives in Los Angeles.

“This slender volume is a wonder. . . . Social historians as well as film buffs should put Adventures of a Secretary on their reading list this summer.”—Leonard Maltin Leonard Maltin

“A unique perspective on the early film world.”—Stanley Kauffmann The Australian

"Valeria Belletti's letters to her good friend Irma are sure to be devoured by all who want an inside look at Hollywood in the twenties. These letters make for some of the most fascinating reading about the goings on at the studios in one of their greatest eras. Cari Beauchamp's editing provides a superb read, and is not to be missed by all who love and laugh at the world of movie-making."—Mary Lea Bandy, Chief Curator, Department of Film, The Museum of Modern Art, New York

“Plucky Italian Jersey girl moves to the Coast, survives Sam Goldwyn. Adventures of a Hollywood Secretary is an intelligent, clear-eyed view into '20s Hollywood and the psyche of the women who worked within it.”—John Sayles


"At last, a delightful insider's account of stars and studios in 1920s Hollywood told by the one person who really knows and never tells-the secretary! Elegantly edited and annotated by Cari Beauchamp."—Mollie Gregory, author of Women Who Run the Show

"I greatly enjoyed reading Valeria's letters—she fell in love with Hollywood and the romance of movie making much as I did when I got my first job as a reader at RKO in the thirties. She gives us a rare glimpse of a memorable era."—Fay Kanin, Award winning screenwriter and four-term president of the Academy of Motion Picture Arts and Sciences