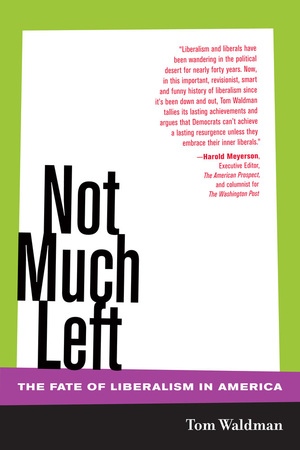 Not Much Left The Fate of Liberalism in America

Tom Waldman's lively and sweeping assessment of the state of American liberalism begins with the political turbulence of 1968 and culminates with the 2006 takeover of Congress by the Democratic Party. Not Much Left: The Fate of Liberalism in America vividly demonstrates how the progressive and liberal wing of the Democratic Party helped end a war, won the civil rights battle, and paved the way for blacks, women, gays, and other minorities to achieve full citizenship. Through reportage, anecdotes, and analysis—particularly of the disastrous defeat of Democrat George McGovern in 1972—Waldman chronicles how the grand coalition that achieved so much in the 1960s began to self-destruct in the early 1970s. Citing the Republican recovery from Barry Goldwater's 1964 defeat, Waldman demonstrates how the two parties' very different reactions to electoral debacle account for recent Republican dominance and Democratic impotence. Assessing liberalism's fate through the Carter and Reagan presidencies, the defeat of Michael Dukakis in the 1988 presidential election, and the on-again, off-again liberalism of the Clinton years, Waldman then brings the discussion up to date with analysis of the 2008 presidential campaign.

Tom Waldman is the author of We All Want to Change the World: Rock and Politics from Elvis to Eminem; The Best Guide to American Politics; and Land of a Thousand Dances: Chicano Rock'n'Roll from Southern California. Tom Waldman spent seven years as press secretary to Congressman Howard Berman from Southern California, and another five as Public Information Manager in the Los Angeles branch of the Federal Reserve.

“Though it’s got special appeal for lefties, Waldman’s cogent historical-political analysis is sure to engage election junkies of any political persuasion.”—Publishers Weekly

"Tom Waldman's book is extremely interesting and gives us a lot to think about, particularly at this moment in our nation's history."—Congressman Henry A. Waxman

“Tom Waldman's Not Much Left is a sweeping analysis of the demise of American liberalism over the past 40 years, written with clarity, great insight, and admirable research.”—Joe Domanick, author of Cruel Justice: Three Strikes and the Politics of Crime in America's Golden State