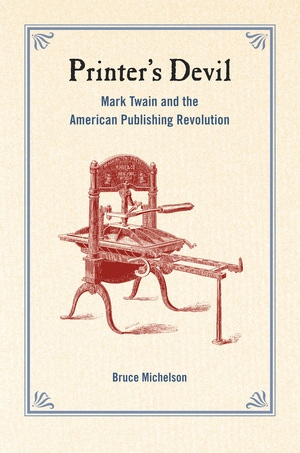 Trained as a printer when still a boy, and thrilled throughout his life by the automation of printing and the headlong expansion of American publishing, Mark Twain wrote about the consequences of this revolution for culture and for personal identity. Printer’s Devil is the first book to explore these themes in some of Mark Twain's best-known literary works, and in his most daring speculations—on American society, the modern condition, and the nature of the self. Playfully and anxiously, Mark Twain often thought about typeset words and published images as powerful forces—for political and moral change, personal riches and ruin, and epistemological turmoil. In his later years, Mark Twain wrote about the printing press as a center of metaphysical power, a force that could alter the fabric of reality. Studying these themes in Mark Twain’s writings, Bruce Michelson also provides a fascinating overview of technological changes that transformed the American printing and publishing industries during Twain's lifetime, changes that opened new possibilities for content, for speed of production, for the size and diversity of a potential audience, and for international fame. The story of Mark Twain’s life and art, amid this media revolution, is a story with powerful implications for our own time, as we ride another wave of radical change: for printed texts, authors, truth, and consciousness.

Bruce Michelson is Professor of English and Director of the Campus Honors Program at the University of Illinois at Urbana-Champaign. He is author of Literary Wit and Mark Twain on the Loose: A Comic Writer and the American Self, among other books.

“Astonishingly capacious and meticulous and, as a material history of print and image reproduction and distribution, [it] is a remarkable achievement.”—American Periodicals

“[A] thought-provoking discussion of the impact not just of the printed word but also of the printing of the word on literary meaning and identity. . . . Throughout, notes and documentation attest to the thoroughness of the research that supports Printer’s Devil.”—Bloomsbury Review

“Michelson’s vocabulary is erudite and his inquiry is complex and sophisticated, but the volume will replay the effort it requires.”—Choice

"In this fascinating study, we see a great 19th-century writer grappling with such 21st-century concerns as the challenge of authenticity in a world of ubiquitous duplication, the meaning authorship in an age of celebrity, the role of words and texts in a world ceaselessly bombarded by visual images, and the struggle to simultaneously exploit and contain the power of new technologies. Michelson sets Twain's often playful interrogation in fiction of new cultural forms such as the interview or the "chromo" against the backdrop of changes in publishing and print media that brought these forms into existence. Printer's Devil will interest anyone who cares about Mark Twain or the history of print culture in America."—Shelley Fisher Fishkin, author of Lighting Out for the Territory: Reflections on Mark Twain and American Culture


" A major contribution to Mark Twain studies and, more broadly, to an understanding of American culture."—Gregg Camfield, author of The Oxford Companion to Mark Twain
Read More >

1. Samuel Clemens and the Printed Word
2. The Mischief of the Press
3. “But Now Everybody Goes Everywhere”
4. Huckleberry Finn and the American Print Revolution
5. Mark Twain and the Information Age
Afterword: Mark Twain for the Next Fifteen Minutes