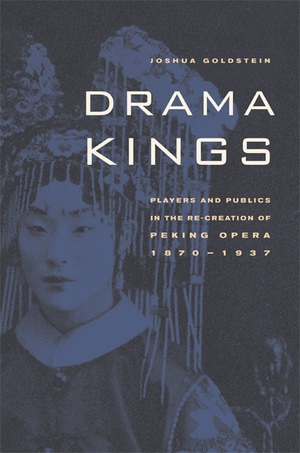 Drama Kings Players and Publics in the Re-creation of Peking Opera, 1870-1937

In this colorful and detailed history, Joshua Goldstein describes the formation of the Peking opera in late Qing and its subsequent rise and re-creation as the epitome of the Chinese national culture in Republican era China. Providing a fascinating look into the lives of some of the opera’s key actors, he explores their methods for earning a living; their status in an ever-changing society; the methods by which theaters functioned; the nature and content of performances; audience make-up; and the larger relationship between Peking opera and Chinese nationalism.

Propelled by a synergy of the commercial and the political patronage from the Qing court in Beijing to modern theaters in Shanghai and Tianjin, Peking opera rose to national prominence. The genre’s star actors, particularly male cross-dressing performers led by the exquisite Mei Lanfang and the “Four Great Female Impersonators” became media celebrities, models of modern fashion and world travel. Ironically, as it became increasingly entrenched in modern commercial networks, Peking opera was increasingly framed in post-May fourth discourses as profoundly traditional. Drama Kings demonstrates that the process of reforming and marketing Peking opera as a national genre was integrally involved with process of colonial modernity, shifting gender roles, the rise of capitalist visual culture, and new technologies of public discipline that became increasingly prevalent in urban China in the Republican era.

Joshua Goldstein is Assistant Professor of Chinese History at the University of Southern California.

"Drama Kings is a splendid piece of work, combining a rich texture of anecdote with an articulate and challenging theoretical position that reaches beyond the topic at hand. Goldstein breaks new ground by tackling opera in a fashion that is sensitive to a range of economic, social, and economic contexts. Clearly and elegantly written, this investigation of biographical, institutional, and social movements provides an especially rich set of perspectives on this period in China."—David Strand, author of Rickshaw Beijing: City People and Politics in the 1920s

PART TWO. PEKING OPERA TO NATIONAL DRAMA, 1920-1937
5. Landscape and Figure, Nation and Character
6. The Limits of Reform
7/ The Gendering of National Culture, Or, The Only Good Woman is a Man
8. Nationalization through Iconification